Random observations from a day in London

Here at the end of my first full day in London, here are just a few random thoughts:

1) I found another sign today that should have been included in yesterday's post. It was in the stairwell of the office where we were meeting: 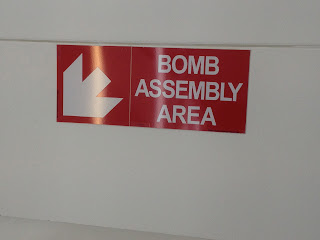 So...I don't think the sign means what they think it means. Hopefully, there's not a place downstairs where bombs are being assembled.
2) Doing the same presentation seven times in one day can be tiresome, but it wasn't really today. I think it's because I find the people over here so interesting, and it's fun having conversations with them - yes, even business conversations.


3) There are doing something really cool here, as explained by my friend Gemma. They did an Easter egg "hunt", where people who spotted one of 209 (I think) huge eggs around the city could text a picture and be eligible for a prize. I wish we would do something like that at home. Here's a picture of one of the eggs: 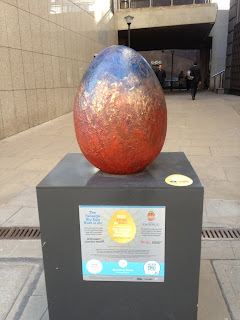 4) After dinner tonight we went to see a stage version of The Wizard of Oz, produced by Andrew Lloyd Webber. Here I am in front of the theatre: 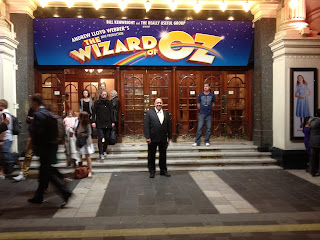 It was alot of fun. It used all the music from the movie plus a few original songs by Tim Rice (lyrics) and Mr. Webber (music), who kinda knows a thing or two about writing musicals. The girl playing Dorothy was an understudy, so I enjoyed watching her have her moment in the sun. I think my favorite parts were both in the last ten minutes:

And while it was a good day over here, yes, Dorothy, you're right - there's no place like home.