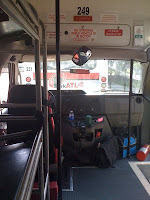 Last night, returning home from Chicago, I followed my usual routine. I always use the park-and-ride at the Atlanta airport (bus pictured at left). It's convenient, cheap, and I always know where to go for the bus that returns me to my car. (There was one time when my ticket was wrong and we spent over an hour looking for my car - but that's another story.)

As always, I got on the bus along with about eight others, and the bus headed to our lot to drop us off one at a time.

As it turns out, I was at the end of the parking lot where I was going to be the last one dropped off. One of the first guys to be dropped off was a young dude in a suit, and he got out and went straight to his Audi. This group of strangers were actually laughing together about the way we would find our cars - making the lights blink with the key fob.

Well, when the group was down to three, a young woman near the front of the bus noticed one of these on the seat beside her:

Yeah, that's right. Somebody had left their iPhone on the bus.

We quickly figured out who had been sitting there; it was the guy with the Audi. The driver asked the rest of us if we minded whether she tried to find him before dropping us off. Of course not! So she whipped that bus around and headed back toward the exit. We weren't exactly burning rubber, but we were moving pretty good for a shuttle bus.

Well, just when we thought we were too late, we saw an Audi moving toward the exit booth. Is it him? We all thought so. So the driver got us as close as she could quickly, and as she came to stop, the exit gate opened for the car. She began blowing the horn loudly and repeatedly.

A blur - She opened the bus door. I grabbed the phone and jumped out. I ran toward his car as fast as I could. And yes, I caught him and knocked on his window before he left. Needless to say, he had this look on his face like, "what the heck is wrong with you??"

It was funny. I handed him his phone and he just had this stunned look on his face. I was probably 10 feet away when I heard him call out "thank you" from a distance. I'm sure it took him that long to process what had just happened.

It was a very cool thing to be a part of. It made the night of everyone on that bus that we had helped the dude. For just a few minutes, the driver, the young woman, and one other man felt like friends instead of strangers.

And that was awesome.
Posted by Donnie Manis at 12:31 AM