Judge not, so that you will not be judged.

To listen to some talk recently, one would think this isolated quote was the gospel. What is the greatest commandment, Jesus? Apparently not his answer, to love God with all your being. No, it must be this, right?

The rest of Scripture? Take it with a grain of salt, or at least interpret in the light of this one.

There's a really popular term these days. It's hypocrite. Anytime the world sees a Christian fail to live up to the standards of our message, it prompts one reaction: hypocrisy! See? They must not really believe what they say. They don't practice it.

Of course, this is absurd. The absolute beauty of the gospel, the absolutely most marvelous thing about what Jesus did for us, is that he knows we are flawed, messy, broken, at times disgusting - and he loves us anyway. "But God demonstrates his own love toward us, in that while we were still sinners, Christ died for us." (Romans 5:8, NASB, emphasis mine)

You know who wrote that verse? A guy named Paul, who wrote several letters making up most of the New Testament. Paul's background? He spent much of his early adult life traveling about putting Christians to death. Murder. Cold-blooded murder. Grace was enough to cover him, and he never forgot it.

Now at this point, what you're thinking about depends on when you read this. If you're reading it near the date I wrote it, you're thinking about Josh Duggar. But I'm sure if you're reading it six months from now there will be another issue, another follower of Christ in the spotlight for some way in which their actions did not match up with what they believe. It has happened since the beginning, and it will happen until the end. So I'm going to try to keep these thoughts at a more general level, and not make it about one situation. Does it apply? Sure, but enough about that.
___________________

So followers of Christ fail. It does not invalidate our message, and in some ways it highlights the true message. Christ came in the world to save sinners. But we do have to acknowledge this: when those hostile to our cause see those failings, it does cause some to stumble. We should always take sin seriously, for many reasons. One of those reasons is that some will use it as an excuse to reject the Savior. And the more excuses we can remove, the better. Which brings me to 1 Corinthians 5, and the real point of this post.

Please use the link above to read it yourself; I'm going to assume you have done so from here on.

This is a passage we don't talk too much about, at least in my church. There are probably several reasons for this, all of which are reasons we need to talk about it:


Now, there's a word for what Paul is asking the church to do. He uses it four times in the passage. It's not a popular one. It's the one in our opening passage:

So, if you read this passage carefully, it's pretty clear we have misinterpreted what Jesus meant. But that's a topic for another day. The topic for today is this: If we are going to be lights in the world, we have to take care of our own business. The time to say that anything goes in the church because we want to be loving and accepting is...well, it's not gone - it never was here. Yes, we have to speak the truth in love. But when we see our brother or sister doing things clearly against God's word, we need to react. If they claim the name of Jesus, they are by definition submitted themselves to the correction of the church. And we must start exercising it.

As Paul says in verse 10, he doesn't mean that we should expect nonbelievers to behave like us. That is not the gospel. We should show them Jesus, let therm know God loves them despite their sin, and let him change their hearts. But once they are one of his, the world is watching. The world is looking to see whether belonging to Christ really changes anything. So it's critical that we help each other to show them that it does.

True followers of Jesus will grow in love for God and their neighbors. They will increasingly want to do good, and find themselves desiring evil things less and less. And it's our job to help each other do that.

So how about it, church? Can we commit to helping each other? How? Well, look at the passage. Watch each other's back. When we see things that need to be addressed, stop turning away - do whatever is necessary to get each other back on track. And when we do, forgive and forget the past. Welcome the straying brother/sister back into fellowship, without reservation.

Do this, and the world will see that Jesus makes a difference. They may not like it - darkness has never done well around ther light. But maybe a few more of them will be attracted to a fellowship where people really love each other, love each other enough to keep them on track.

That's the church. And it is awesome.
Posted by Donnie Manis at 4:57 PM 1 comment:

Wanna see a good example of what makes the gospel of Jesus different from the world...different from what everyone around us thinks it takes to live a good life? Check out this meme, which I saw on Instagram last night: 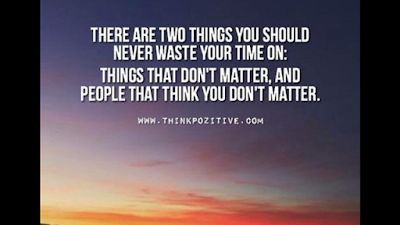 The first part, okay. We definitely should not waste our lives on things that don't matter. The focus of life should be on people, relationships, and loving God. Those are things that matter.

But the second part? Well, it sounds good. Who wants to to waste time on people that don't appreciate it? What a waste.

Except that is exactly what Jesus did, and it's what separates true discipleship from a feel-good, me-first, get-me-to-heaven, meet-my-material-needs gospel.

This meme says, Love those who love you. Those who can and will return your affection.

Jesus said, Love your enemies and pray for those who persecute you.

The meme says, If they mistreat you, don't give them the time of day.

Jesus said, If they strike on one cheek, turn the other. If they ask you (unfairly) to carry their stuff one mile, volunteer to carry it two.

The meme is saying, You can only take so much. If they treat you as worthless, give up on them.

And most importantly, Jesus put his words into action. He went to a cross and died for everyone, including millions and millions who reject him and say with their lives, You don't matter, Jesus. He died from them, and still pursues them desperately urging them to change their hearts and minds.

A waste? No, it's what God designed us for. And the way we can tell someone who is really captured by the Spirit of God is when they do "waste" their life on those who think they don't matter. That is not natural. Or more precisely, it's supernatural. Nobody would do that on their own; it takes the resurrection power of the Messiah living in them.

When is something wasted? Here's the perspective of a woman whom Jesus encountered:

What did you think of the meme?
Posted by Donnie Manis at 11:13 PM No comments:

It was a trying time in the history of our country. One like no other.

I remember when I was middle school (or, as we called it then, junior high school) and I heard about Watergate. Are you too young to have experienced it? If so, surely you studied it in history classes. Over the course of about two years, we went from a back page story about a simple hotel burglary to a full-blown conspiracy that infected the top levels of our government. There were Congressional hearings. Special prosecutors. Resignations left and right. And finally, in an unprecedented scene, the President of the United States admitted his role and resigned.

Here's the thing about that period from June 17, 1972 to August 9, 1974: Our government could not focus on anything else. Every white house briefing was dominated by Watergate questions. No matter how much officials would try to talk about the economy or national security, the questions came back to Watergate. No other topics could compete.
______________________

This is the dilemma we see in the little book of Jude, the next to last book of the Bible. It's a short letter, only 25 verses. When we think of the New Testament, the gospel, and Jesus, we think of love mercy and grace. And like other New Testament writers, Jude really wanted to focus on those things. But alas, the church was facing its own little Watergate...and it had to be addressed.


Beloved, even though I was very anxious to write to you about our common salvation, I found it necessary to write appealing you to contend for the faith that was once for all delivered to the saints. For certain people have crept in unnoticed who long ago were destined for condemnation, ungodly people, who pervert the grace of our God into sensuality and deny our only Master and Lord, Jesus Christ.

See what I mean? He really wanted to write an upbeat letter. But there were things that needed to be said. Things that were corrupting the good. Two things in particular:

It's right there in the passage. This passage from the New Testament, which so many want to turn into a one note song: "Judge not."

The gospel is a wonderful thing, the best news ever. All of us who follow Jesus want to spend all out time proclaiming the love, mercy and grace that God has shown us through the cross. But there comes a time when we have to contend for the faith. So let me ask: do these two poisons sound familiar to you? Are they not the essence of some of the biggest hot buttons in our country right now?

The book of Jude reminds us that there are times that call for a firm response. Love is not waving cheerfully to our friends as they head toward a cliff. Jude says that sometimes love means having to take a stand. As he says in verses 22-23a: "Have mercy on those who doubt; save others by snatching them out of the fire."

Friends, you do not know how much I wish we could just talk about the gospel. But the metaphorical reporters keep asking about Watergate. So we've got to tell the truth.

That's love...which is so much greater than tolerance.

Which leads Jude back to where he wanted to go...

Now to him who is able to keep you from stumbling and to present you blameless before the presence of his glory with great joy, to the only God, our Savior, through Jesus Christ our Lord, be glory, majesty, dominion, and authority, before all time and now and forever. Amen. (Jude 24-25, ESV)

Posted by Donnie Manis at 12:06 AM No comments: