(Continuation from Volcanic ash revisited, Part I)
So there we were a year ago with some time to kill in France. Not a bad situation, except for the reason – volcanic ash, air travel shut down, no way home.
So we were stuck, and our next meetings were scheduled for Monday. We decided that on Saturday we would take a day trip to Normandy. As Americans, we felt it would be shame to be so close to there and not visit. The Allied assault on the beach there was key in overcoming one of the most evil dictators in history, and so lives were lost there. My Uncle Ed was part of D-Day and was fortunate enough to make it home. So yeah, that was a good idea.
So here was the plan: Take a train to a little town called Caen. Rent a car there. Drive to the north beaches of France and end up at the American cemetery at Normandy. Spend some time there, drive back to Caen, and take the train “home” to Paris.
Most of the plan went extremely well. Most of it.
I’ve got to stop here and say that the time at Normandy was an amazingly moving experience. There aren’t many places in the world where the enormity of its significance just overwhelms you. I’ve been to a few. Red Square. The Dallas Book Repository. Tiananmen Square. Ground Zero for 9/11. But nowhere is the history more poignant than at Normandy.
Rows and rows of crosses where American troops are buried, all of whom died in one short period of time. 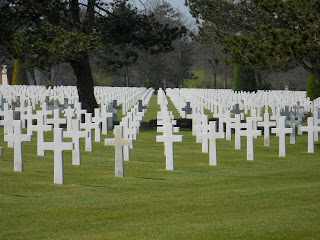 Beaches where you can just picture the fateful day when Hitler’s demise commenced. 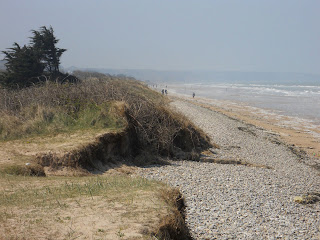 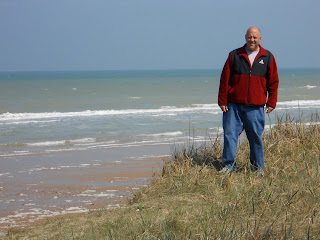 It was incredible. I will never forget it.
And then it was time to head back. Not a pretty sight.
The whole experience is a series of images now. Sort of a blur. First, we dropped off the rental car keys under a locked door, because the office had closed. Then we walked across to the train station, expecting to catch the last train back to Paris. Well, we saw a train scheduled on the board, but it never came. We waited...and waited...and waited. Finally we decided to ask someone, but we couldn't find anyone who could (or would, I suspect) speak English to the dumb Americans. Eventually we realized...

THE LAST TRAIN HAD LEFT AND WE WERE STUCK. (There was a strike, it turns out.) In the little town of Caen. 150 miles from Paris.

Well, we desperately tried to get a cab to take us to the airport, where surely we could get another rental car. Nope - since the airlines were shut down (remember the ash?), the rental car offices we closed. The volcanic ash strikes again.

Anyway, there were only two taxis in the whole dang town, and they were going back and forth picking up people from the line of probably 50 stranded train passengers.

What a mess. I remember walking across the street to a Chinese restaurant and getting something to eat. We might as well make the best of it, right? God would take care of us, and it would be a great story later. Travel is all about adventure, and boy were we having one!

It ended well. A resourceful member of our group (Thanks, Bill) found an American serviceman who had talked a cab driver into taking him to Paris. It was soooooooooo expensive that he was glad to share his cab and have us pay a share of the cost. So we jumped into a taxi at 11 pm, and arrived at our Paris hotel two hours later. A long night, but the stuff memories are made of. Looking back, it was fun. (Yeah, I know...I'm sick.)

Back in Paris. A good night's sleep. And then a few more meetings before dealing with the question again...when and how would be get home?