It was one of those moments...one of those comments...that caused the switch to come on. And I was looking at my surroundings in a whole different way.

I was in Bermuda last week for some work-related meetings. (I know, I know...sounds like tough work. I'm not going to try to convince you otherwise. Although it really is.)  The morning after we flew in we had some free time before our colleagues arrived and so we decided to explore the beach.

It was different - nothing like the white Panama City beaches we're used to around here. More like what you would picture for California. Intermittent stretches of light colored sand with alot of rocks and cliffs. 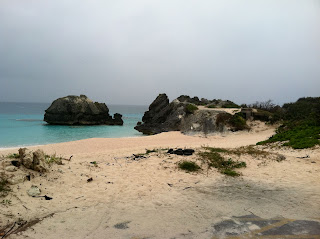 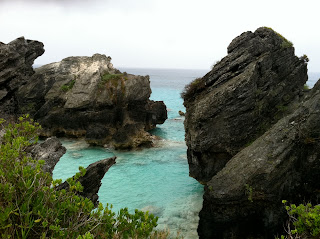 Beautiful, right? It was breathtaking, and not just because we were climbing some of the rock formations to get a better view down the beach. (See what I did there?) I have been to Bermuda several times but I had never taken time to see this part of the island.

So we were walking along taking in all of God's handiwork when suddenly we came across this odd rock formation: 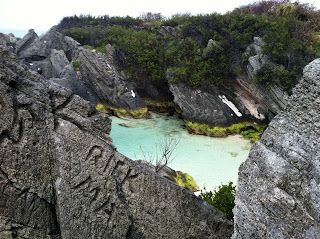 See there on the bottom left? It's a series of letters carved into the rock. And four of them actually form the name Rick. Well, a friend in our group noticed this and made the observation of how strange it was that nature could have carved out all these initials naturally while forming the rocks. How random!

Of course Bill was being facetious; everyone knows that letters have to be formed by people. People who know a little something called the alphabet. The initials were a sign that someone had been there.

And that's when it hit me. Something I knew of course, but something that was not resonating deep inside. Until then. The whole beach, all the rocks, the whole island was a sign that someone of unfathomable intelligence, creativity, and power had been there. A person had carved the initials. And the God of the universe had carved the whole thing.

And the whole expedition changed. I marveled, worshipping that God in my spirit.  It was awesome.
Posted by Donnie Manis at 6:34 AM