"I have no other place to turn" 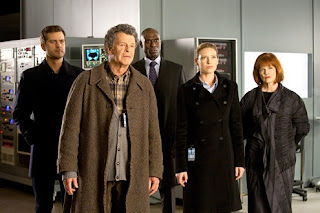 To some who were confident of their own righteousness and looked down on everyone else, Jesus told this parable: “Two men went up to the temple to pray, one a Pharisee and the other a tax collector. The Pharisee stood by himself and prayed: ‘God, I thank you that I am not like other people—robbers, evildoers, adulterers—or even like this tax collector. I fast twice a week and give a tenth of all I get. “But the tax collector stood at a distance. He would not even look up to heaven, but beat his breast and said, ‘God, have mercy on me a sinner.’ I tell you that this man, rather than the other, went home justified before God. For all those who exalt themselves will be humbled, and those who humble themselves will be exalted.” (Luke 18:9-14)
"Previously on Fringe":
Walter is a scientist with a dark secret - one that drove him to mental illness. Years ago, he was a brash young scientist playing fast and loose with the laws of physics. His research led him to conduct drug experiments on young children, play with the minds of other test subjects, and ultimately to use his knowledge for an act of selfishness: After his son Peter's death, he  crossed over to a parallel universe and stole the son of his counterpart. (Yes, I know this sounds ridiculous.) The nature of such an action has caused the two universes to start disintegrating and now, as the result of his selfish act, an entire world will perish. Heady stuff.
Over the years, the consequences of his actions haunted Walter. He was always looking over his shoulder. He could see the world breaking down around him, and he knew it was his fault. Eventually his son Peter learned the truth, creating a fissure in their relationship that would be very difficult to overcome. And the more he tried to fix things, the worse they got. Finally he began to gain the wisdom that comes with humility, enabling him to make wise choices. It has become evident that one of those choices may be the need to sacrifice his son.
______________
So this wonderful TV show Fringe has brought us to the point where in last week's episode found the world falling apart, all because of what Walter had done. A machine activated by his evil counterpart on the other side (dubbed "Walternate"...clever, eh?) is poised to save their world by destroying ours, and Peter is the only one who can stop it. And in the process could likely die. Walter comes to the conclusion that he has to let go of his son in order to save the world, a theme that rang very familiar as the show aired on Good Friday.

But Walter is not God giving his son, he only played God with his scientific abuses. And so the plan didn't work. While trying to enter the machine and turn it off, Peter is knocked backwards and falls, oh, 20 or 30 feet to the ground. He is knocked unconscious. And as his life hangs in the balance, the historically agnostic Walter enters the hospital chapel, and we are treated to this amazing scene:

(I could watch that scene over and over - what an amazing actor John Noble is!)

No, God is looking for humility. An awareness that we are not in control and have no idea how to fix our lives...or our world. That all our efforts, all our schemes, all our knowledge will fall short if he is not involved. That "Unless the Lord builds the house, the builders labor in vain. Unless the Lord watches over the city, the guards stand watch in vain." (Psalm 127:1)

Watch the scene again. This is where Walter has finally arrived. He has done everything in his power to try and undo his crimes (or sins) against nature and is finally asking for help from the only one who can. "I have no other place to turn." That is a powerful statement. And it's true for me, and for all of us. We just don't know it most of the time, especially when things are going well.

And look back at the parable. "God, have mercy on me, a sinner." Yep...he has no other place to turn. and neither do we.

As we sit here in the wake of the unspeakable tragedy that has hit our state, our world seems to be crumbling around us as well. Truly, God, we have no other place to turn. I pray that we will depend on you in this time of rebuilding and restoration that is beginning. And I pray even more fervently that we will continue to depend on you when that day comes where things seem alright again.

The next episode of this amazing show airs tonight. I can hardly wait to see what happens next. How will Walter's prayer be answered? Which world will survive - either? Both? What will happen to Walter, Peter, Olivia, and other characters whom I haven't mentioned? Whatever happens, I expect to be on the edge of my seat and to again be thinking about the greater themes of life. Because that's what good stories do.
Posted by Donnie Manis at 5:56 PM