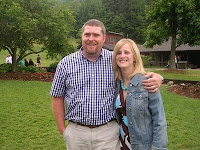 It was a cold night in Minnesota, January of 2008.  I was there to go ice fishing (of all things), invited by friends up there that I work with.  It was very, very cold -- about 10 degrees below zero -- and there was lots of snow.

So on Friday night while I was there, I got a call from some friends.  Turns out it was snowing at home.  In Montgomery!  For the first time in years.  So I left the south to see snow, and there it was in my back yard.
But that's not what this blog is about.  It's about what my friends were doing when they called me.  You see, a small group of friends who had met as YoungLife leaders had begun getting together on a regular basis at my house.  We would eat Thai or Indian food.  We'd talk about life, our ministry together, and fun stuff.  And, as a group that loves good stories, we would watch a couple of favorite TV shows together.
At the time we were watching a couple of shows, Heroes and 24, as a group.  But on that cold night, we were caught up as a group, and they were snowed in, and they were looking for something new.  Enter the greatest show in the history of television.  That's right...LOST.
At the time, the show had not begun its 4th season, and my friends had not ever seen an episode.  So...the phone call.  I discovered that cold Friday night that my friends were at my house, without me, watching my DVD of the pilot episode.  I was thrilled, because you always want to share your passions with those you're close to.  And this definitely qualified.

Well, it's too late to make this long story short, but my friends became as addicted to this amazing drama as I was.  I had the most fun watching the DVDs with them, and watching them enjoy it was almost as cool as the show itself.  We had long discussions about what stuff meant.  But as great as that was, what really, really was awesome was a tradition of getting together with friends and sharing life.

Fast forward two and a half years.  Two of our group, Clark and Laura (pictured at the top of this post), have been in Asia for the past two years.  They have had two children.  Throughout most of history, end of friendship, right?  But through the technological marvels of email, skype, and facebook, we have kept in close touch.  I even went to visit them once.  And now...they are back.

So, Sunday night, we renewed a tradition.  This time at their house.  The core of the old group was back together.  Eating chicken tikki masala (not to mention some delicious pies Laura made!).  Talking about Asia and my trip to Africa.  Catching up on life.  Watching a movie.

It's good to have y'all back, guys.  I look forward to many more evenings like Sunday.  Friends and family...the stuff life is made of.