It was early Sunday afternoon, and we were headed to lunch.  I was in Tallahassee visiting my good friend Steve and his family, and we had just left an awesome worship service at their church.  As we circled the building searching for a parking place, I saw the following sign: 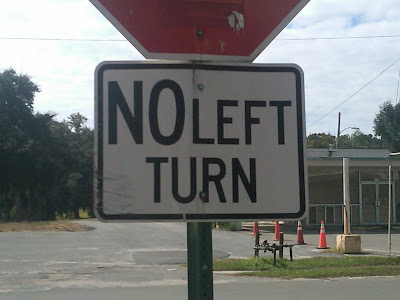 Now I've seen plenty of "no left turn" signs.  But this one is a little different.  Did you notice it?  It has the word NO in huge letters.  We all know what this means: the sign is shouting at us.  "NO left turn!"  Dummy!
Now I don't know the story behind the sign.  I imagine that some previous, normal version of the sign had been ignored over and over.  For some reason, the city felt the need to emphasize that they really, really meant it.
We have all sorts of language tools to tell people that we really mean something.  We promise.  We swear.  We swear by things.  Jesus saw this and he had something to say about it:

Again, you have heard that it was said to the people long ago, "Do not break your oath, but fulfill to the Lord the vows you have made."  But I tell you, do not swear an oath at all: either by heaven, for it is God’s throne; or by the earth, for it is his footstool; or by Jerusalem, for it is the city of the Great King.  And do not swear by your head, for you cannot make even one hair white or black.  All you need to say is simply ‘Yes’ or ‘No’; anything beyond this comes from the evil one. (Matthew 5:33-37)

It's easy to focus on the specific admonishments in this quote.  Don't do this, don't do that.  Don't break your oath, don't swear at all.  But the key to the whole passage is the last sentence: let your yes be yes and let your no be no.  What is Jesus saying?  It's pretty simple really.  Be a person of your word.  Always tell the truth.  Always do what you say you're going to do.  Have integrity.  If you do that, then you won't need to say "I swear".  Or "I promise."  Or "I mean it."  Or "This time I really mean it!"  Or "Not just no but....(you know the rest)."

That's what the sign was saying.  It's my prayer that I would be the kind of person that you believe what I say without me having to convince you.  If we all did that, how cool would that be?