Last night I was taken back to a time and place that seemed far, far away.  My friend Shell was in town -- my friend whom I had not seen for almost five years.  Michelle was born and raised in Australia, but her heart and soul have been in Russia for a long, long time.  And that is where she spends as much time as humanly possible.  But this night, she was in the U.S., in Alabama.  And a few of us got to see her again, and hear about what God is doing through her.  It was an awesome evening. 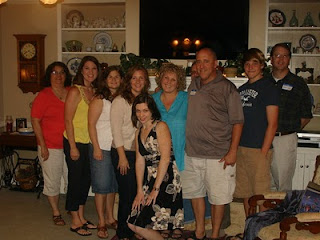 A little over ten years ago, I met Shell when I was part of a team from my church that went to her city in Russia.  It was my first experience in overseas outreach, and it was amazing.  For two weeks, she had led us in conducting an English camp for Russian students.  We spent every waking hour with them for over a week and poured ourselves into those new friendships.  I was so struck by the fact that, despite what I had grown up believing, these people were never our enemies.  Their government may have been before the Berlin Wall came down, but they never were.  And I fell in love with them as a people who were oppressed and needed to know that someone cared.  Since then, Leningrad by Billy Joel (watch the video below) has been one of my favorite songs.
So last night, some of us who had experienced that gathered to visit with Shell.  It was great seeing Brandi, Jenn, and Briana, with whom I had shared 1999.  And to see Jennifer and other friends who went in other years but shared the same bond.  We had a great time reminiscing...about how God spoke to us and changed us.  And about the funny times as well...like when our team leader John tried to practice his Russian by ordering tea with milk, and ended up ordering tea with butter.  (Yeah, I know...you had to be there.   Trust me -- it was funny.)
As the evening wound down, it was awesome to hear about how our foreign friends were doing.  But then God did an awesome thing -- he brought the evening back to something he has been teaching me all summer.  Michelle showed a video about her current ministry focus -- on the orphans of her city.  She then told us about the children she worked with, some of whom have gone through horrific treatment.  Unlike Africa, where the AIDS epidemic and other poverty has left millions of children with no parents, Russia has been devastated with untold numbers of social orphans - children who are alone because of parents who abused and/or abandoned them.  Hearing their stories hurt my heart.  I was reminded again of James 1:27.  As I have been all summer.

So even my first overseas outreach experience, an English camp for Russian students, has come full circle to where my friend is now an instrument of God's love of the fatherless.  This is his heart, whether in Africa, China, Russia, or right here in Alabama.  May I never forget that...may I pray, give, and love.

Thank you for your faithfulness, Shell.  May the Lord be with you every step of the way.
Posted by Donnie Manis at 12:15 AM