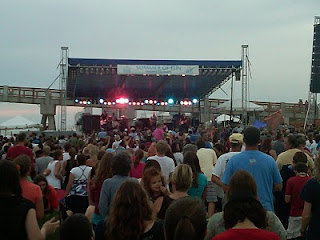 Football season is less than two weeks away...if you don't believe it, see the counter on the right hand side of this page.  I can't wait!  But, that being the case, I decided to escape to the beach this weekend before beginning our traditional football weekends.  I met up with my friend Steve and we had some great down time on the agenda - good food, good coffee, a couple of movies...you know, just chilling.

When I arrived Friday night, Steve pointed out that there was a sign up that said "Christian concert on the beach".  (As a side note, I don't know why we have to label music as if God can or should be contained in a box...but that's a subject for a different post on a different day.)  Turns out that, among others playing this weekend, Chris Tomlin was scheduled to appear.  "Cool!" I thought.

So yesterday afternoon we exited a bad movie at Pier Park.  We heard the music and headed toward the beach, expecting to enjoy some great sounds and impromptu worship on a Saturday evening.  What I got was unexpected -- but it shouldn't have been.

There was a huge crowd gathered on the beach, as you can see in the picture above.  The music was great, the crowd was into it.   Then, as dusk approached, something amazing happened...the music reached into my soul and I was simultaneously standing on the beaches of Panama City and sitting is a dingy lobby of the Country Inn of Pallisa, Uganda.

As Chris led us in a magnificent singing of How Great is Our God, it hit me hard that just 47 days earlier I had been singing it in that hotel with 29 friends -- 28 of whom I had known for less than two weeks but who had become very dear to me.  As Chip led us that night, we could feel powerfully that we were in the presence of the One to whom we were singing.  Why was it so stark that night on the other side of the world?  There are many reasons, but two stand out to me:

So...as we sang with the band on the beach last night, I thought about the fact that the power was not in the tight music of such talented musicians.  Or in the large chorus of voices ringing out with praise.  Or even in the spectacular view that the Lord provided as a backdrop.  It was in the fact that the Creator of the universe was there and we were in fellowship with him and with each other.  And God was pleased.  He is there in the midst of Africa, and he is here in the mundane details of trying to live for him each day.

And so, as the sun began to set over the water... 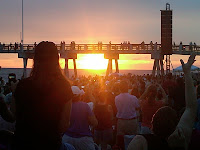 ...Tomlin shared that he had sang this song all over the world, in twelve different languages.  And then he began to sing, "Grande nuestro Dios.  Cantare...grande nuestro Dios.  Todos veran que gande es nuestro Dios."  And then in Russian.  And as we stood in wonder, I knew my friends in Ethiopia and Uganda were right there with me.  And that was an amazing feeling.
Posted by Donnie Manis at 3:10 PM