The 2014 NCAA basketball champions…the Connecticut Huskies. If you read my blog post Saturday, you know I'm not exactly thrilled about how little the regular season means in determining a basketball champion. But they played lights out for six games and were the better team last night, so it is well deserved. Congrats to them!

If you followed it at all, you know that the key to their win was the awesome play of Shabazz Napier. Not surprisingly, he was named the Most Outstanding Player of the Final Four. 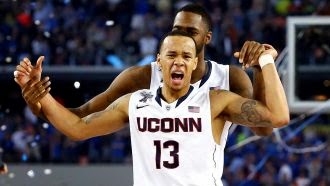 Shabazz was the star of the tournament, and as a result he was the center of the sports universe for a few minutes last night. He was onstage, receiving the championship trophy along with his teammates, and of course the trophy for his individual honor.
____________________

CBS has a tradition for closing their coverage of this tournament. For 28 years now, they have ended their telecast with a montage of highlights set to the music of David Barrett's song, One Shining Moment.

It's appropriate, because for these young men, and for Napier in particular, it was a moment to remember. One where the world focused on them, giving them accolades for their very significant accomplishment.

As the TV screen's glow was fading last night, I picked up my Kindle to read for a few minutes before going to bed. I was astounded to come across a passage in the book I was reading that referred to the concept of the one shining moment. To me, that was no coincidence, but something that God had for me to learn that very night.

Here is the passage from RC Sproul's Everyone's a Theologian:

God's incommunicable attributes point to the way in which God is different from us and the way in which He transcends us. (They) reveal why we owe Him glory, honor, and praise. We stand up and give accolades to people who excel for a moment and then are heard no more, and yet the One who has the very power of being in and of Himself eternally, upon which every one of us is absolutely dependent and to whom we owe our everlasting gratitude for every breath of air that we take, does not receive the honor and glory from His creatures that He so richly deserves.

No, that was no coincidence. I was highly impressed with the Huskies and with Napier last night. They played some awesome basketball. And I should be; Sproul is not saying that we should minimize the accomplishments of men and women.

Not at all. But what he is saying is that God is so magnificent, so awesome, that he deserves every last drop of applause, praise, honor, and glory that we can give him. And then some. Far from minimizing what I saw on TV last night, it actually makes it more special.

How so? I think it means that when I see someone have their one shining moment, I can make it be a reminder to praise the One who has one shining eternity. The moment seeing a football champion honored, a great musician on stage, a masterful piece of art, a poignant moment in a stage play or musical…all those can point to the one who created it all. This is how I can enjoy the things I enjoy on earth without worshipping the creation - by letting them point me to the Creator.

And glory to God.
Posted by Donnie Manis at 6:38 PM