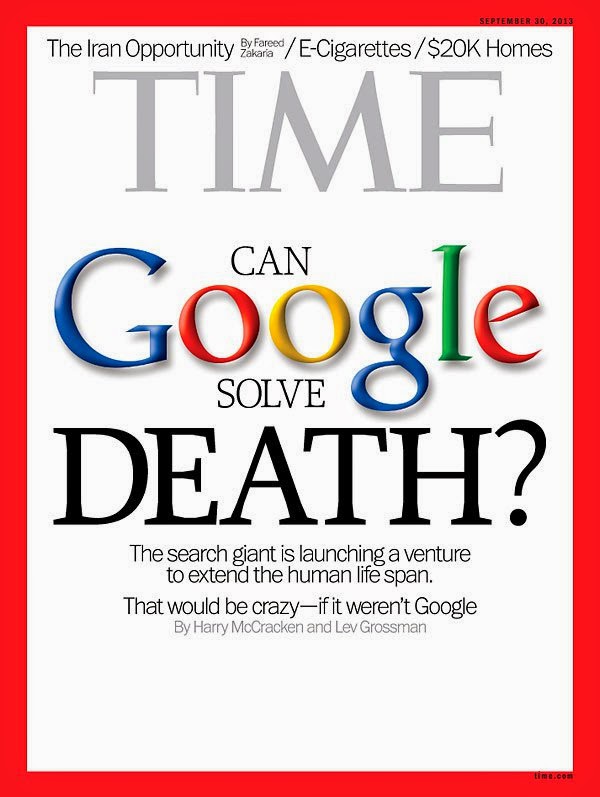 I got a text from a friend today. Seems he saw the magazine to the left in the stack of the waiting room where he was…well…waiting. It's from last September but it grabbed his attention. And especially this week - Holy Week - it grabs mine as well.

I tried to find the article online but without a subscription I could only see the first couple of paragraphs. I need to find it and read the whole thing, because it is definitely an intriguing premise. Basically, Google is founding a subsidiary (known as Calico) focusing on health and aging, with the goal of significantly extending the human lifespan.

And so the cover asks the question, Can Google solve death?

It's a question that strikes at the heart of our greatest fears. If there is something, or someone, out there that can "solve death" it would change everything.

And that is why the good news of Jesus is so…good. For the entirety of human history, we have been slaves to death. It is the greatest enemy. It snatches away those we love, and one day it will get us too. It is so insidious that facing it moved Jesus himself to anger and tears (John 11:33-35). It is something we hate, and we have good reason.

But death's days are numbered. The King of the universe entered his creation, spent his life announcing  the kingdom of God in both word and deed, and then did the most amazing thing ever. Even though he was God, he subjected himself to death, and by the very act of that submission, defeated it. That victory was confirmed by God on the third day when he rose from the dead, never to die again.

So, go ahead Google. Fight death, find ways to extend life. That would be cool. But ultimately, no - Google will not solve death.

But that's okay. Because Jesus has.
Posted by Donnie Manis at 9:31 PM