In memory of Phil Richardson 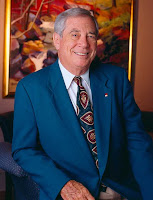 You never know the influence you have on others. You just don't.

The year was 1987 and it was the biggest faith leap of my life. Through a series of events, I knew that God was leading me away from a teaching career but I didn't know exactly what he was leading me to. Then, at a lake party for a friend who was getting married, I was given a name and phone number. It was Phil Richardson of Alfa Insurance.

I gave Mr. Richardson a call, and over the next two weeks I interviewed with four different people at Alfa. After much prayer and thought, on July 9, 1987, I began my career as an actuary.

Mr .Richardson passed away this last Thursday morning, and we will be saying goodbye at a service tomorrow. As I look back over my career, I can't express how much this man did for me. He got the process started for me to begin my career as an actuary. His leadership created a successful company that God has used to bless me over and over. About two years into my career, he made the decision that the future of the actuarial function should be in the hands of this kid and supported me in every step of my growth. He gave me advice countless times (some would say his "advice" could be harsh - I never saw it that way) and taught me principles that I still quote today. He was a true leader and I will always be thankful.

But the thing I will remember most about Mr. Richardson was when he pulled me aside one day in the fall of 1996. I had just come back to work after facing the aftermath of a pool accident that claimed the life of my sister and left my niece horribly injured. I was crushed and it was hard to see how to face each day. Well, he took me in his office and confided about the way that he had lost his son to an accident almost 20 years earlier. And he told me that when I needed to, I needed to find a room, close the door, and just cry. I knew he spoke from experience, and it was incredibly moving.

That is the Phil Richardson I knew and will miss. He will stay with me in so many ways. Goodbye, Mr. Richardson.