Pippin - worth the wait?

The musical Pippin has always held a close place in my heart. From the time I was privileged to help with a production of it at Lee High School in the mid-80s I have loved the music, the script, and been fascinated by the themes of the show. So I was thrilled to learn that a revival was opening on Broadway, as I shared in a previous post.

And so I made arrangements to see it as soon as I could, and that time was this past Saturday night. I was so excited. I read everything I could about it. And I walked into the Music Box Theatre on 45th Street full of anticipation. 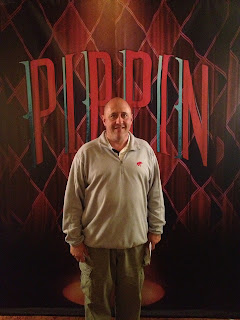 A buildup that nothing could live up to, right? Primed for disappointment, you say?

This was one of my most enjoyable theatre experiences ever. The cast was sharp and highly energized, playing off a highly enthusiastic audience, the pacing was crisp, the and I loved the choices made in this production (as discussed below). The best of those choices was the use of highly skilled circus acrobats for the ensemble. So entertaining! And so appropriate for the script. Check out this teaser, which shows only a fraction of the energy:

In Pippin, we're not ever sure what is real and what is in Pippin's head. The use of the circus performers enhanced this, as it created a fantastic journey where the Leading Player is leading our hero toward desperation in his quest to be extraordinary. Desperation that is designed to produce the grand finale promised to the audience. As Pippin progresses through glory, the flesh, revolution, politics, and the ordinary life, the wonderful acrobatics really works in portraying just how attractive - no, seductive - his dream is to him.

I so want to walk through the way the plot worked and why it did, but I'll refrain for two reasons: 1) to do it right it would make for a blog that is way too long, and 2) I could never do it justice. But here are a few random comments:


What a wonderful Saturday night, one I will always remember. I did "come and waste an hour or two" - plus a weekend. And I'm so glad I did. Extraordinary.
Posted by Donnie Manis at 6:41 PM