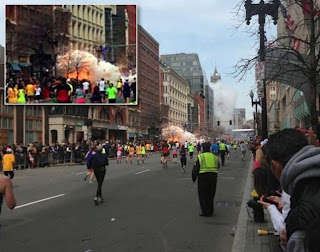 So many dates. So many events where most of us will remember exactly where we were when we "heard the news." And today was another one.

It is hard to put into words just how shocked and sickened we all are as we process what happened at the Boston Marathon today. It's hard to believe people can be this sick, this callous, this evil.

But I as process it, I keep coming back to two thoughts. Two things that I already knew but it's at times like this that I find out whether they are just platitudes or I really believe them.


Does he care? Absolutely. He entered the world in the person of Jesus to experience death and suffering on our behalf, and the power to overcome by his resurrection.

Is he going to stop it? One day, yes. In his good time, when he has accomplished all his purposes.

It's hard to trust this at times, isn't it? When you see the devastation in Boston today. When you go to places ridden with incredible poverty, despair, hunger, and disease. When you realize that around the world incidents like this happen almost every day in places like Iraq and Somalia, killing innocent bystanders every day. Where is the love?

We Americans tend to believe the the ultimate good is safety, comfort, and freedom from suffering. Jesus said something quite different. The ultimate good comes from how we react to suffering, and the good things God does in us when we experience it. So when awful, awful things happen, that is when the Lord of the universe does his best work.

I see evidence of it already. The way people ran toward the explosions to help people rather than running away. The way some runners went directly to the hospital to give blood - even though they had to be almost dehydrated. People thinking of others rather than themselves - this is where we begin to see God working his will.


So I grieve. And pray. But I also wait anxiously to see what the Father is going to accomplish. Because it's going to be awesome.
Posted by Donnie Manis at 11:06 PM