One of a kind...Ted Cheek 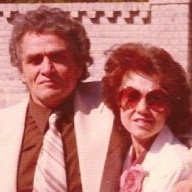 The year was 1986. I was so excited when I found out that my uncle wanted to take me on a trip. A trip to a place I'd never been before. Hello, New York City!

Just Uncle Ted and me, exploring the Big Apple. The Empire State Building. Rockefeller Plaza. The Statue of Liberty. But most of all, Broadway. That was the summer I fell in love with the the Great White Way, and in particular the best theatre anywhere in the United States.

Our first priority was Ted's favorite, Big River. I was spellbound. Then we saw a revival of Sweet Charity, which I wanted to see because I had been involved in a production of it at Lee High School. Finally, I went to see Cats; Uncle Ted had no interest in that so I went alone. Three shows, great food, and the lights of Broadway. I've been hooked ever since.

After an amazing life, Uncle Ted went to his eternal reward Tuesday. He will be missed by so many people. He was a man with an amazing heart for everyone - his family, his friends, and anyone else who needed his help. You could see the love and compassion of Jesus in the way he loved and cared. He always took care of my mother (his sister) in ways that I could see, and I am sure in ways that I will never know. He was the president of a business that they owned together (along with their other brothers) and his leadership was legendary. Their business gave me my first job as a teenager, where over the course of six years I learned my work ethic. Whether through his business, his church, or time with his family, his life touched so many people.

My roles in my own family fall into three categories: son, brother, and uncle. While I did not get to observe much about his life as a son, I watched and watched and watched him be a brother to my mom. And I experienced firsthand his love as an uncle. I sit here tonight and say with all the conviction I can muster: I am better at all of these because of how it was modeled for me by Uncle Ted.

I am going to miss my uncle so much. Tomorrow we will say goodbye and celebrate his life here on earth. It will extremely difficult.

And one week from tomorrow, I will be on a plane to New York for a couple of days. I will see a couple of shows, eat some great food, and marvel at the world Uncle Ted introduced me to almost 30 years ago. While my trip was planned weeks ago, I don't think this is a coincidence. I get to celebrate this great man by revisiting the place where we had such a great time. He will be in my heart with every step.

Thank you, Uncle Ted. I miss you.
Posted by Donnie Manis at 9:56 PM