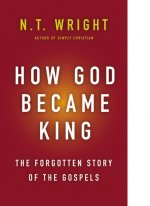 In How God Became King, N.T. Wright addresses a very important question for Christ-followers. Why were the four Gospels written? What were they trying to communicate? How should we read them  today?

It came as something of a surprise to me that Wright considered this question worth asking. After all, I've read the Gospels all my life, and have found much in the them to help me live. Parables, miracles, and sermons are scattered throughout the accounts, all sandwiched between a description of how Jesus' ministry began and his death and resurrection. But as I began to read, I saw that this was the issue. The church has always been focused on the importance of the Virgin Birth, the Crucifixion, and Resurrection. And we diligently study Paul's letters providing context after the fact for what it all means.

But Matthew, Mark, Luke, and John wrote a lot of stuff in between. So what is it? Filler? Random stories?

Or is there a theme that runs through the entirety of the Gospel accounts, including the parts we focus on so much? If there is, how should we approach the Gospels so as not to miss that theme?

In the book Wright makes a compelling argument that may change entire perspective. (Although perhaps most of you tracked the themes and I'm just dense.) He reminds us of the importance of context, and that Jesus came to be the Messiah, the One promised to Israel. He makes the case that YHWH promised to one day redeem his people and reign one the entire earth, not just Israel. And that he purposed to accomplish that through suffering and sacrifice.

In Jesus, all that was fulfilled, and that is what the Gospels are about: the  coming of the long-awaited Kingdom of God through the life, death,and resurrection of Jesus. Not something that was just for later, after we die - something was that initiated through Jesus' ministry and continues today through us all. Truly, the Lord's prayer expresses it so well; we are to pray that "Thy Kingdom come, they will be done, on earth as it is in heaven." This is why Jesus came.

This is an outstanding book, and I plan to read more of Wright's material. If you want to know more, here is a link where you could order it: How God Became King.

Jesus came to bring God's Kingdom, and he made it possible through his death on the cross. I pray that I would do my part to continue the work in my generation.
Posted by Donnie Manis at 6:23 PM