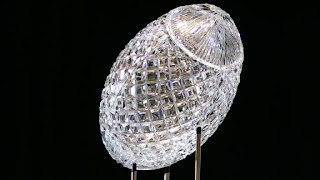 And in just a moment, it was gone...shattered into a million pieces.

The BCS Trophy, commonly referred to as the crystal football, is not an easy thing to win. But it is, obviously, easy to break. And this past weekend the 2011 trophy belonging to the Alabama Crimson Tide was accidentally knocked over by the father of a player. He placed it back after holding it, walked away, and the rest is history. And so is the trophy.

The mishap has spawned all sorts of observations, humorous and otherwise. The best was summed up on this banner:

With 14 championships, the most in college football history, there are definitely a lot of trophies. But this is an exaggeration. I know because in January I did trip in Tuscaloosa. I broke an ankle, but not a trophy!

As I reflect on the broken trophy, a couple of thoughts run through my head. Might as well let you in on them, right?

The name of Jesus gives us hope of something that will last a lot longer than trophies. Or houses. Or land. Or money. You see, it doesn't matter if our trophy breaks, or my house burns, or the stock market crashes. Or even if they take my life. Those things won't last anyway. But because of Jesus, life with God dwarfs those things. And will never pass away.

So shatter the trophy. Have your fun. Take everything I own. But I have the last laugh, because the Creator of the universe has me in his hands.

And nobody is going to trip and shatter that.
Posted by Donnie Manis at 8:13 PM