That's not what happened...not at all 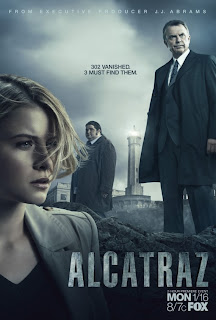 "On March 21st, 1963, Alcatraz officially closed. All the prisoners were off the island. Only that’s not what happened. Not at all."

With the narration began one of my most highly anticipated shows of the last two years. Just a few months after LOST ended, word got out that there was to be another show with some of the same bloodlines. JJ Abrams producing. Michael Giacchino doing the score. And one of my all time favorites, Jorge Garcia (Hurley!), as one of the stars. I was sad LOST was ending, but I looked forward to Alcatraz.

It took nearly two years after LOST ended for it to hit the air. In the meantime, there have been several really shows to catch my attention. The best of these is Fringe, another Abrams creation. (You should check it out.) But there is something about the promos for this show that whispered hope for those of us who missed the greatest serial drama  of all time.

Before I give my thoughts, here's a trailer so you can see what it's all about:

Well, after watching the first night, what's not to love? It has in only two hours, introduced interesting characters who I think I will begin to care about soon, laid out a fascinating premise involving government conspiracy and time traveling prisoners, several layers of mystery, and two major plot twists that caused my jaw to drop. With the narration quoted above, it hooked us and then repeated the same lines at the end of the first hour in context (while giving us the first big reveal). Love that! It laid out a format for future episodes (one prisoner at a time) that, in my opinion, will help keep the premise from getting old.

And I had forgotten how much I loved watching Hurley until I watched Garcia creating another lovable character.

Ok, I can hear some of you who watched saying that there were places where the plot was too unbelievable to get in to. Sure, it's out there. But I would say to you, relax. Enjoy it. Suspend your need for logic for an hour and just enjoy.

By the way, it does have a few things in common with Fringe. A core group of characters who are not just random investigators, but have a history related to the bigger mysteries of the show. And an aspect that is like a procedural drama (case of the week) but all in the context of a bigger mythology. Yep, pretty cool.

So...has LOST been replaced for me? That's not even possible. I had to go into this reminding myself not to use that as the standard...it would only lead to disappointment. But the first episode was a dang good one to me, and I can't wait to see what happens next.