Not many of you should become teachers, my fellow believers, because you know that we who teach will be judged more strictly. (James 3:1) 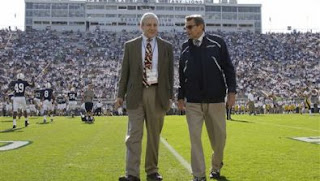 It is a sad day for many of us, for many reasons. We have learned that an institution that we respect has been tainted by the most insidious of crimes for many years. And we have learned that people in powerful positions who could have done more to stop it...didn't. And they have paid with their jobs and their reputations.

I have dozens of thoughts running through my head, most of them filled with anger and outrage toward the perpetrator. But some of them serve as a warning...a warning that we must always be on our guard to do the right thing. Not just complying with the law, but doing the right thing no matter what the cost.

I am sad for my friends in Pennsylvania who are part of the Penn State family. I have so many friends there who I met over the summer and my heart hurts for them. I cannot even imagine how I would be feeling if this had occurred here in Alabama. If you are reading this, please know I love you and I know that the pockets of evil do not erase all the good things about your university. As a friend posted this afternoon, "We Are...more than this scandal." We know that. And we know you will come through it strong.

Children have been injured. It's outrageous.

God is sovereign. And I can rest in that. But it's not easy.
Posted by Donnie Manis at 10:40 PM