So yesterday I was reading, hanging out at home, and kind of watching a movie. Kind of. I was barely paying attention, but it was on. The movie was an old espionage thriller, Clear and Present Danger starring Harrison Ford.

Well, I got a phone call and hit the pause button. It's a wonderful invention on a DVR, right? When you need to talk, you can hit the mute button to silence the TV, or you can just freeze the whole dang thing. I froze it.

After I was done talking to my dad on the phone, I look back at the TV and saw this: 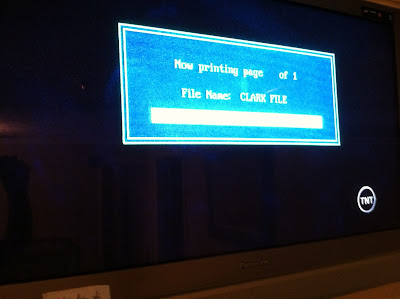 And at that point I had a total brain spasm. I stared at the screen trying to figure out what had happened. It appeared that my TV screen had become a computer monitor. And what was that message about? Was my computer printing something? What was the "Clark file"? And most importantly, how the heck did my computer suddenly gain the ability to use my TV as its monitor?? It's not rigged for that.

I should be embarrassed to admit that some 30 seconds later or so, I figured it out. Of course (as I'm sure all of you know) that was not an image from my computer. The "TNT" logo in the corner should have been a pretty decent hint, no? Anyway, I just happened to freeze the movie at the exact moment that it was showing a computer monitor from the movie.

So I still don't have a way to connect my computer to my TV as a monitor. It would be really cool, especially to watch games on ESPN3. But I'm not there yet. Despite my goofy brain freeze yesterday, yes - I will have actually hook something up to make that happen.