Harry Potter: It was over too soon...but so worth it

(Note: This post is a break from the series on my recent trip to Africa.) 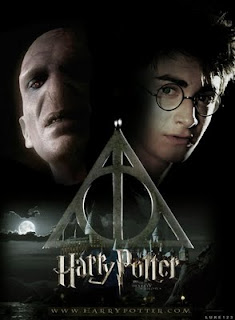 It was one year ago. I was walking out of the movie theater, having just seen the latest Harry Potter flick, Deathly Hallows, Part 1. For at least the second time in that same situation, I said to my niece Macy, "I'm going to read all the books before the next movie." But as the series was coming to close, this was my last chance to really do it.

I knew that if I were going to get the full enjoyment out of the finale, I would need to follow through. For you see, I had seen the previous movies, but not necessarily in order, and definitely with no sense of the story thread. Or the themes it was addressing. This was a shame, because I'm such a fan of epic stories that are told in installments. In fact, as I walked out of that theater I was only two months removed from the end of the best epic story ever told on television, LOST. So I was starving for something to fill in the gap. And so I began reading.

Well, I finished just in time - last Monday, three days before the midnight premiere of Deathly Hallows, Part 2. I had already bought my tickets to the midnight show, so it was imperative that I finish. I did.

What I found as I read the 4000 or so pages was everything you would look for in a epic series. Characters I grew to love and others I hated. Human drama and fantasy adventure. Themes that are embedded in the very nature of life: Love. Revenge. Good vs. Evil. Enduring friendships. The importance of self-sacrificial love. Family. Dealing with grief. Destiny vs. free will. Doing the right thing in the face of adversity. And even sacrificial death and resurrection as an instrument for defeating evil.

And, as an extra bonus, an extremely rewarding ending for such a long story.

So there I was at midnight last week, sitting in a movie theater with hundreds of my closest friends. (I think the theater was using all 16 screens.) I sat there with a sense of anticipation, and also a sense of regret. I wished that I had started reading years ago, so that I could have experienced the unfolding of the story over time as it was intended. But I was gratified that I finally knew this wonderful story and that I was about to see its conclusion portrayed in what I knew would be a powerful movie.

I was not disappointed. As the crowd sat there in silence on the edge of our seats, the story unfolded in a masterful way. Just the right mix of action, humor, and drama. The best part of the whole story is 100 pages of the final book, and the movie got to that point early enough to do it justice. We saw the courage, the determination, the heartache, and the ultimate battle in all its glory.

The story is now told, and I'm glad I finally jumped in with both feet. Wish I had done it earlier, but that's water under the bridge. Better late than never.
Posted by Donnie Manis at 11:11 PM