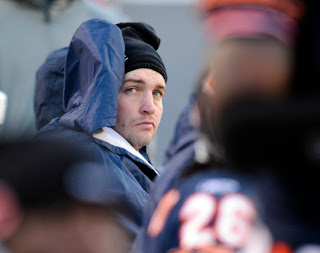 If anyone doubts how much the explosion of social media has changed our lives, yesterday provided a prime example of how things are completely different than a few years ago. Heck, probably even a few months ago.

I was watching the NFL playoffs yesterday, really with no dog in the fight (ooooo, probably a bad expression to use when discussing the NFL...thanks, Michael Vick). I just wanted to soak up the last morsels of football before it's over on February 6. In the first of two games, between the Chicago Bears and the Green Bay Packers, the Bears fell behind 14-0 quickly. The offense was struggling and it was a miserable game for the Bears - exacerbated by the 20 degree weather. And then, early in the 3rd quarter, they had lost their quarterback.

Even as I write this, the debate rages as to whether Bears' QB Jay Cutler should have sucked it up and played. Was the injury bad enough to keep him out of such an important game? Why did he stand on the sidelines with a disinterested smirk on his face as his team went down? Why was he not seen giving guidance to his backups? Well, the purpose of this post is not to weigh in on that debate. (However, if you follow me on twitter, I think you know what I think.) No, what fascinated me about yesterday was the immediate and strong reactions that were instantaneously available - thanks to twitter.

Almost immediately after Cutler left the game, the questioning started, and we all could see it and weigh in ourselves. During the game, I let my followers know what I thought and saw the thoughts of my friends almost instantly. Ok, fine. But more significant to me is the way that the opinions of the well-known were out there so quickly. Want to know what your local sportswriter thinks of a controversy? 1995...read a paper the next day. 2000..read it on the paper's website in a few hours. 2005...read in in the writer's blog probably within an hour or so. Today? Follow him/her on twitter - instant opinion!

Well, that's kinda cool and where I get most of my breaking news nowadays.  But yesterday took things to a level that I'm not sure I've ever seen before.  Because other football players (former and current) - Cutler's peers - immediately started blasting him in real time.  Here are tweets from yesterday, as quoted in an online column from ESPN's Michael Wilbon:

Darnell Dockett (Arizona Cardinals): "If I'm on the Chicago team Jay Cutler has to wait 'til me and the team shower [and] get dressed and leave before he comes in the locker room."

Derrick Brooks: "There is no medicine for a guy with no guts and heart."

Maurice Jones-Drew: "All I'm saying is he can finish the game on a hurt knee...I played the whole season on one."

Mark Schlereth: "As a guy [who has had] 20 knee surgeries you'd have to drag me out on stretcher to leave a championship game."

Unprecedented! In fact, so much so that it seems to me the reaction, rather than the injury, is the talk of the sports world today.

We are in an amazing era. And I have to confess that I love it. It has its downside, and it can be vicious. There definitely has to a heightened sense of responsibility and consideration when things spread so instantaneously. But I know I love knowing what my friends are thinking so quickly. And it's also cool to know what the rest of the world thinks.

One more thing:  Do you think that, say a year ago, Desmond Howard (1991 Heisman trophy winner and the first to strike the Heisman pose in a game) would have given me the time of day?  Well check out this exchange from this morning:

@donnie19 (me!): @desmond_howard Wrong. He stood there with disinterested look on his face instead of tutoring backups. Totally checked out.

Yep, I got a smackdown from Desmond Howard!  Awesome!  Is this a great world or what?