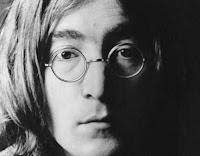 I remember the night very clearly.  It was 30 years ago today, and I was watching Monday Night Football, and the New England Patiots were about to line up for an important 4th quarter kick against the Miami Dolphins.  MNF was only about 10 years old, and it was in its prime.  Then, suddenly, they interrupted their discussion of the game to make this announcement. (Please take a moment to view the video in the link.)  The infamous announcer Howard Cosell rocked the world by telling us that something more important than football had taken place.  John Lennon, "perhaps the most famous of the Beatles" (Cosell's words) had been murdered outside his New York apartment.

In a moment, a whole nation - really, a whole world - was faced with the fact that a cultural icon of Lennon's stature had been taken from us at a young age.  Senseless.  Tragic.

But the really remarkable thing about the announcement was where it came from.  You see, the story had been discovered by an ABC News reporter, and so his network had the scoop.  So the first reporting of this shocking story was from a football game.  By a football announcer.  And I was watching live.

(Side note: It was revealed later that the announcers discussed whether to interrupt the flow of the game to break the story.  Cosell expressed that he didn't think there would be a good opportunity in such an important game at such a critical juncture.  In hindsight, how dumb would THAT have been?)

What is it about such events that make our memories so vivid?  I don't remember where I was when I found out who won the 2008 Presidential election.  I sure don't remember who won the last 10 Super Bowls.  But when there is a cataclismic even that shakes our world view, we know every detail - not just about the event, but about our own circumstances.

It's the way we were created; no doubt about that.  And I think it gives us some insight into the nature of life.  I believe God gives us an infinite number of moments that can define our lives.  For the rest of our lives and into eternity, the ones where we are really living stick with us.  If we hurry through life, just functioning, just focusing on the next task, life will speed by and be a blur.  The only moments we will hang on to will be the ones that are sprung on us from the media or through the tragic events of our own lives.

So...how will we live?  Will we just function?  Work, play, sleep....repeat?  Or maybe, just maybe, we could live in the moment, absorbing the richness of what God has provided.  Moments of just being with family.  Long deep conversations with friends.  The beauty of God's creation.  Fellowship with Him in prayer.  The joy of helping "the least of these" (Matthew 25:40).

I remember that December night when John Lennon died so vividly.  I pray that I will be intentional about making sure that my life is not made up of sleepwalking in between moments like that, but instead thousands of moments that reflect the purpose for which I was made.
Posted by Donnie Manis at 6:12 PM