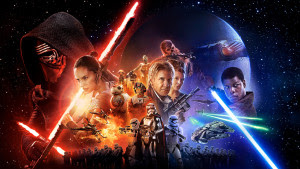 We arrived about an hour before the scheduled start time. Having bought the tickets around two months ago, the anticipation in the air was palpable. For we knew that everyone else in the house had done the same. And there they were, sitting in a nearly-full theater that early.

As the movie unfurled, you would have thought we were watching live theatre. When beloved characters appeared on the screen, there was applause - just like what happens when a lead actor makes their first appearance on stage. There was even applause for the first appearance of a spaceship. When we saw the Millennium Falcon, the place erupted.

And thus opened what I'm sure will be a long run of Star Wars: The Force Awakens.

It was a marvelous thing, a riveting story in a familiar galaxy with familiar characters, as well as new characters who quickly captured our minds and hearts. Daisy Ridley (Rey), John Boyega (Finn), Oscar Isaac (Poe), and Adam Driver (Kylo Ren) were all amazing, continuing the Star Wars history of introducing new talent that become, and always will be, their Star Wars characters. At least to me.

There were old plot concepts, arcs, and themes that seemed to be a repeat of the prior movies but on a larger scale. My friend Rob commented on this in his blog (which was overall a very positive review):


(S)ome ideas from previous installments get recycled to the point of me wondering if it was just lazy writing.

Yes, some ideas were recycled, and I can see how one might wonder. But I saw something else. Star Wars is a story we know. Not because we have seen the previous movies. no, it's a story we know because it touches on the themes of our history and God's plan of redemption.

We all know that Star Wars is a battle between good and evil, both in the cosmos and in the hearts of individual heroes and villains. The struggle is real for Anakin, Luke, Obi Wan, Han, and now Rey, Finn, and Kylo. It's also real for the rebellion and the empire.

And it's real for us. It's real for you and me, and it's real in the story of humans. God created. We rebelled. God saved Noah through the flood. God saved Abraham to raise a people for himself. God saved Israel from slavery in Egypt. And then, as they progressed slowly toward bringing us the Messiah, they repeated the cycle over and over. Read the book of Judges. Rebellion-consequences-rescue-repentance-rebellion-consequences.... Over and over. And it continued on through the exile in Babylon.

So I'm not surprised at the recycling of ideas. That makes it more real to me. God has a master plan for our universe that has involved a lot of setbacks that led to salvation. And his plan for me does too. So a story where the galaxy has to learn the same lessons over again is one that captures me.

I can't wait to watch the final two installments, where our new friends will learn that the legends are true, evil is real, but good is more powerful. And it's there not just for the collective, but for each one of them.

I also can't wait to watch this one...again. I'm sure there will a ton of stuff I missed.

It's a rich story...as is our story. Thanks be to God who has a larger purpose for it all.
Posted by Donnie Manis at 1:32 PM