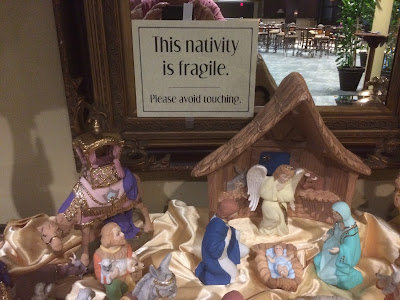 "This nativity is fragile."

It was a display in our church atrium. I noticed it Sunday while we were preparing to present our annual Christmas musical. It was, and is, a beautiful nativity scene. Angels, shepherds, Magi, Mary, Joseph....and of course the Baby. A picturesque display of the moments after God entered human history.

But isn't the sign a little distracting? Doesn't it break the spell?

Not for me. After all, it got me thinking - how fragile is the nativity scene? The real one.

In one sense very fragile, by choice. God, the Creator of everything, the King of the universe, chose to become a little baby. He needed his mother. He cried. His diapers needed changing. He had to be fed and clothed and shielded from the elements. So fragile. By choice. He became vulnerable so that he could identify with me and my kind. And so we could see that God loved us enough to do that.

But, oh, how powerful. In that manger lay the One who would heal the sick, raise the dead, comfort the afflicted, walk on water, calm the seas, and feed 5,000 men with just a few loaves and fishes. All the power behind the universe was focused in the one bundle of flesh. Doesn't sound too fragile to me.


Have this mind among yourselves, which is yours in Christ Jesus, who, though he was in the form of God, did not count equality with God a thing to be grasped, but emptied himself, by taking the form of a servant, being born in the likeness of men. And being found in human form, he humbled himself by becoming obedient to the point of death, even death on a cross. (Philippians 2:5-8, ESV)


Therefore God has highly exalted him and bestowed on him the name that is above every name, so that at the name of Jesus every knee should bow, in heaven and on earth and under the earth, and every tongue confess that Jesus Christ is Lord, to the glory of God the Father. (Philippians 2:9-11, ESV)

So yes, the nativity scene is fragile. As the sign says, "please avoid touching." But it is more powerful than anything else in the world. So instead, let it touch you.

Let the One at the center touch you. And give you life. To the glory of God the Father.