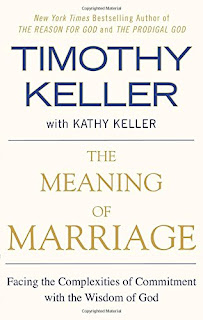 The other day I downloaded a new book for my Kindle.

Yeah, it's the book pictured here. The Meaning of Marriage by Tim Keller.

Why in the world would I want to read that? Not married. Never been married. Not sure that God has marriage in my future.

But Keller is one of my favorite authors and the premise of this new book grabbed me. You see, whether I get married or not, I firmly believe that the Scriptures portray the union of a man and a woman as the predominant picture of God's relationship with his people.

We have become very cynical about marriage in our culture. The divorce rate...the trend of so many couples living together without the vows...the growing belief (now institutionalized by our government) that a person is free to define marriage however he wants - in so many ways we have let go of the original intent when marriage was ordained by God.

All through the Bible we see God portrayed as the bridegroom and his people as the bride, right up to the culmination of history in Revelation 21. I firmly believe this, as stated beautifully by author G.K. Beale:


As husbands unconditionally love their wives and as wives respond to this liven a faithful manner, they are actors on a redemptive- historical stage performing a play before the onlooking audience of the world. As husbands and wives perform their roles on this stage in the way God has designed, their roles are an object lesson to the watching world that Christ has left his Father to love and become one with his bride, and that those who respond in faith can become part of this corporate bride.

What a beautiful way for a family to tell the story of Jesus.

I definitely look forward to Chapter 7, "Singleness and Marriage." Keller definitely intends for we singles to be part of his audience and I know he'll have a lot to say for me. But even if that chapter were not included, I'd read it anyway. Why? I love the picture of Christ and the church that will be portrayed. It's a portrait of his love for me. And it's a foreshadowing of eternity with our Bridegroom.