This past Sunday night, the new season of The Walking Dead began with our survivors trying to adapt to life in the so-far peaceful town of Alexandria. The people of Alexandria have been living a sheltered life, almost completely oblivious to the dangers outside. And so comes our group - Rick, Glenn, Maggie, Daryl, Carol and the rest. They have been fighting "walkers" (zombies) for around two years, but they have an uphill struggle convincing their new friends to learn. Because where is the danger?

It was a very puzzling plot line for the last few episodes of Season 5. Yes, the people of Alexandria were naive. No, they were not equipped to deal with the dangers of the zombie apocalypse. But why? Why had they been so sheltered? Why were their walls not being swarmed by the walking dead?

And then, as the new season opened, we saw this: 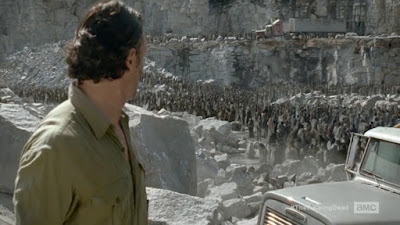 It was a quarry. A ravine filled with hundreds - no, thousands - of walkers. Trapped by the walls, and trapped by some large commercial trucks that blocked the openings. There they were, all these deadly creatures. The town had been safe because they were trapped, trapped nearby, just out of their view. But always out there, always on the verge of escaping. And the time was coming when they would escape. Soon. How would Alexandria prepare? What was the plan?
___________________

And so it goes. For many of us, we are cruising through our day-to-day, mundane lives. We're reasonably happy. We're mostly safe. We have fallen into a routine that we fool ourselves into thinking will go on forever. Or at least for a while, and we'll worry about the after when we get there.

But lurking are the walkers. Just beyond our walls in the quarry. Danger, heartbreak, cracks in the armor. Things that can bring the walls come crashing in. Walkers named...

Lurking in the quarry, waiting for an opening.

Rick and the residents of Alexandria have a plan. What is your plan?

My only plan, my only hope, for dealing with the hundreds of manifestations of death waiting to devour me is this: Trust in the God of the universe, and put all my hope in the saving death and resurrection of his Son. He is sovereign over the world and over all the forces of sin, evil, and destruction that want to take me down. He won't keep me from having to face them. But his power will bring me through them.

How about you? You have a quarry full of walkers too; I know you do. Please don't just whistle in the dark, pretending they'll never come out. Oh, they will. And what will you do?
Posted by Donnie Manis at 12:42 AM