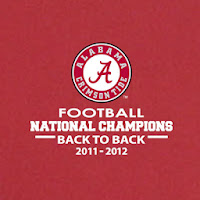 As we close out the 2013 season and savor our final 48 hours as reigning BCS champions, just a few random thoughts on Alabama football.

First, what an incredible group of seniors. Over the course of five years, they were 60-7, won three BCS championships, two SEC championships, and were ranked #1 for part of all five years. Maybe most remarkably, they have been favored in 54 consecutive games. All seven losses were upsets, meaning that the established such dominance that every time they lost, it was considered a surprise. Well done, seniors!

Second, with coaching stability that we have not enjoyed since the early 80s (an eighth year with the same head coach - Coach Bryant was the last one to do that) and maybe the best recruiting class ever coming in, the Tide is poised to continue this amazing run. We ended the season with a bitter taste in our mouths, but that has happened before during the last six years. Each time, Bama rebounded with a vengeance, and I expect that trend to continue.

About that bitter taste. Congratulations to Oklahoma! They played lights out on Thursday night, executed flawlessly, pressured our QB all night, and did everything they needed to do. They outplayed the beast of college football and deserve all the credit. Sometimes we get fans get tunnel vision and  think that every loss is just a failure on our team's part. I prefer to give the Sooners credit for an amazing game, instead of focusing on what Bama did wrong. Both teams played their hearts out; OU just played better.

Looking back on the season, I think this team had some holes from the NFL draft that coaching and effort covered up for most of the season. The pass rush needs to improve and we need to strengthen the edges, especially at cornerback. If I count right, due to inconsistency and injuries the Tide started five different players at CB this year. That will be remedied.

I also think that there was a repeat of 2010, where the mental toughness suffered from so much success. It's easy to forget how you got there. The lessons of 2013 will pay dividends in 2014.

And so we look to 2014. If you look to the upper right of this page, you will see a countdown clock. Before we know it, we will be kicking off the season in the Georgia Dome. Lots of work for the players and coaches to do before then. I believe they will get it done, and be prepared for the first ever College Football Playoff.

The road to 16 continues. Roll tide.