What Child Is This?

How can one birth in a remote corner of the world change the world? What kind of child was it who lay in an animal's feeding trough in Bethlehem? One of my favorite Christmas carols asks that question..and gives one of the best answers I've read: 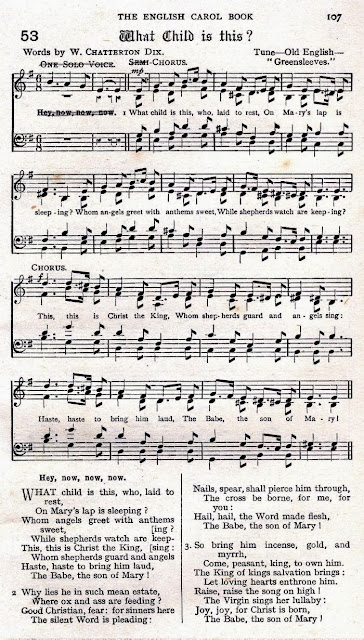 If you look at the lyrics on the page above, you'll see that they are probably not quite the same ones in the same order as you are used to singing. Most of our hymnals have taken the second half of verse 1 and made it a chorus, and used it to replace the the second half of the other two verses. So we sing that three times and miss some key lyrics.

That is a shame.

The miracle - the mystery - of the Messiah's mission is that the God of everything there is entered his creation, and launched a kingdom. He is the King, but he claimed his crown in a surprising way - through suffering. When you sing this carol with all the lyrics, this is the story it tells…and it is magnificent.

The first verse asks the question, What is it about this baby? Why did angels proclaim his birth and why did shepherds come to see him?

What Child is this, who, laid to restOn Mary's lap is sleeping?Whom angels greet with anthems sweet,While shepherds watch are keeping?

Answer…because he is the Messiah, the King of the universe, and deserves all our praise:

This, this is Christ, the King,Whom shepherds guard and angels sing:Haste, haste to bring Him laud,The Babe, the Son of Mary.

Well, if he's the King, the nest question is, Why wasn't he born in a palace? Why would he be born in such an insignificant, smelly place?

Why lies He in such mean estate,Where ox and ass are feeding?Good Christian, fear: for sinners hereThe silent Word is pleading;

How will he plead on our behalf? What will be his plan for announcing that the Kingdom of God has come? The answer is surprising, and one of the biggest mysteries of history:

Nails, spear shall pierce Him through;The cross be born for me, for you:Hail, hail the Word made flesh,The Babe, the Son of Mary.

So was he defeated? What is the result of the nails and spear piercing him? Victory over sin and death! And so the last verse returns to the manger, and proclaims joyfully - along with the Magi who brought him gifts - that the babe of Bethlehem is the King of all...and it explodes in worship.

So bring Him incense, gold, and myrrh,Come peasant, king, to own him.The King of kings salvation brings;Let loving hearts enthrone Him.Raise, raise the song on high,The virgin sings her lullaby:Joy, joy, for Christ is born,The Babe, the Son of Mary.

Lowly birth…to death on a cross…to coronation as King. What a story.

This is Christmas - not just warm fuzzes about a cute baby born in a manger. But the coming of the King.

What child is this indeed!
Posted by Donnie Manis at 8:32 PM