There are many reasons why I love Nick Saban. He is a winner and has brought the Crimson Tide three championships already. He has helped many young men develop to where they can be successful after college. He has a charity that helps young people with hundreds of thousands of dollars a year - and meticulously avoids getting too much credit for it. But another reason became apparent this week. 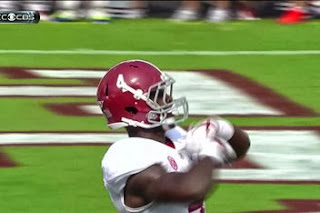 TJ Yeldon is his top running back and maybe a future Heisman Trophy winner. But Yeldon selfishly mocked an opponent last week after a touchdown. If you are a college football fan, you know that he mimicked Johnny Manziel and then made a throat slashing gesture. Nick Saban said, "That isn't us." And he backed it up.

I don't think I've ever seen a player suspended for an excessive celebration. Until now. TJ will watch the first quarter of tonight's game from the bench.

Discipline. Nick Saban. They go together like Coke and Golden Flake.