Dietrich Bonhoeffer - so much I never knew 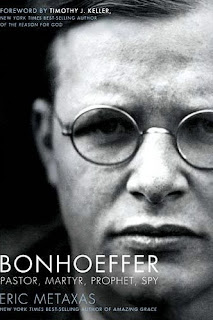 I remember when I first heard of Dietrich Bonhoeffer. I was working with the youth group at my church years ago, and our youth minister Greg talked about his book The Cost of Discipleship. I knew that one of the main concepts of the book was that of cheap grace. It could be summed up in this quote from that book:


Cheap grace is the grace we bestow on ourselves...(it) is the preaching of forgiveness without repentance, baptism without church discipline, Communion without confession...(it) is grace without discipleship, grace without the cross, grace without Jesus Christ, living and incarnate.

Powerful stuff. But I never knew the context, what drove Bonhoeffer and his theology. But having just finished the biography Bonhoeffer: Pastor, Martyr, Prophet, Spy, I do now. And wow.

I highly recommend this book for anyone who wants to know more about the rise of Hitler, what drove Germany toward World War II, the resistance movement and the plot to assassinate the evil head of the Third Reich. But I recommend it even more for anyone who wants to see a picture of what it's like to turn your life over to Christ completely and live for him at great personal cost. Because that's the life of Dietrich Bonhoeffer - a life cut short at 39 years of age because he stood up to the evil Nazi empire.

I learned so much from this book. I now can read the works of the great theologian knowing that when he talks about cost, he's speaking from personal experience. And as I try to live for the Messiah Jesus in an age of hostility to his truth, I can gain comfort from the fact that this man modeled what it was like to do so in an era of unspeakable evil the like of which we can't even imagine.

But there are two things that Bonhoeffer emphasized in his life that stuck with me the most. Both are important truths for living in 21st century America:


I could go on and on about what I learned, but I'll finish with this: Discovering the details of a man's life tells us so much about what he was trying to say. It's all about the story. I pray that I will live my life in such a way that the words I proclaim match the story my life tells.

As it did for Dietrich Bonhoeffer.
Posted by Donnie Manis at 6:54 PM