My first international trip was in 1994. It was a doozy, one that can never be topped - I went with my church to the Holy Land. Three days in Galilee, four in Jerusalem. What an amazing thing to have walked where God walked when he took on flesh.

But the reason I thought of it today is the fact that it was so difficult - and expensive - to stay in touch with home. There was a hotel phone with extremely expensive rates and a sequence of numbers to remember that was confusing. I talked to my family twice, and both were brief. It felt like I was a million miles away.

Then came Russia in 1999. This one was truly surreal. We spent 10 of our 12 days with no phone anywhere on the property. And the two days in Moscow where we did have a phone, well, considering the language barrier we almost never got through.  It really felt almost like I was on another planet.
_____

So skip to today. Hi from London, everyone! It's still not close to the same as being at home. I have to be real careful to use wifi when it's free so as not to accidentally pile up a big bill. And there are places I travel (like parts of Africa) where the connection is either unreliable or non-existent. But I'm so thankful that right now - at this moment - I can let my friends and family know how I'm doing. So....hi! 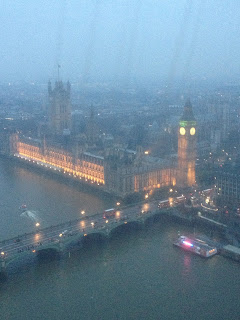 And yes, it's me. I offer two pieces of evidence...I think you'll recognize me:


It's been a great day, glad I could tell you about it. Maybe you'll hear from me again while I here...because I can.