A few years ago, I was in Athens, GA with my friends Brian and Tommy for the Alabama-Georgia football game. It was halftime and the Tide was getting killed. I went to the concession stand for a Coke and when I got it, to my surprise, they took the bottle cap away from me.

I was like, what?? One of the worst things about Cokes at a ball game is when people spill them on your stuff. If we can screw the cap back on after every sip, that won't happen. But nooooooooooo! I couldn't keep the cap.

Why not? Well, apparently they were concerned about the possibility of fans hurling the caps toward the field if they got upset. Don't like the ref's call? Throw a bottle cap. That's right...your bottle cap. What a threat.

Friday night I got back to my hotel room and was watching Sportscenter. For those of you who don't know, there was a bad call in Atlanta (that's right!) where umpire Sam Holbrook incorrectly applied the infield fly rule. (Read the whole story here.) Well, the game was delayed for 19 minutes because the field was cleared for the safety of the players. Fans had begun to throw debris to express their displeasure. 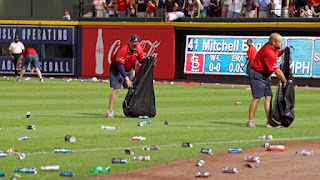 The fans' behavior Friday night was inexcusable. But I've got to confess that wasn't my first thought. My first thought was how silly it is to think you can prevent this by taking caps off soft drink bottles.

So call me a rebel, but when I go over there I will continue to bring my own cap from a soft drink at home. When they give me a capless bottle, I will walk away and put it on the bottle. And I will never ever throw it at anyone!

My neighbors who don't get my drink spilled on their stuff thank me. Or they would if they knew.