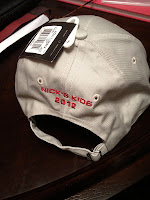 See the hat to the left? It was free. Well, sorta. 'Cause it cost me a little bit of face.

Thursday I was playing in the Nick's Kids Golf Classic - a tournament for a group of core supporters for Nick's Kids Foundation. It's an awesome organization created by Nick and Terry Saban, giving money to dozens of charities that support young people. Most recently, it has given about $2 million to help with tornado relief in Alabama. It's a side of Coach Saban that most people don't see.

Anyway, the hat. I was playing hole #17, which is the 3-par that Coach Saban plays with every group in the tournament. When you get to the hole, you get to take a picture with the coach: 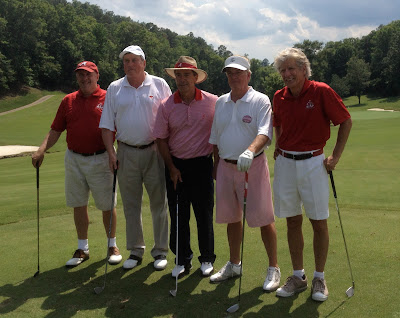 So after the picture, we all teed off. Needless to say, Coach Saban hit his ball within about 10 feet of the hole. (Is there nothing this man is bad at?) Well, when it came my turn, I took a couple of practice swings, stood over the ball....and choked. Big time. I had been hitting tee shots well all day, but this time I shanked the ball off to the left and only about 40 yards. Skimming the ground as it went. Yep, big time choke.

Well, when I went to get my ball, there was no point walking back to the tee box to get in my cart. So I just walked up the fairway to meet everyone else at the green.

As I approached the green, I looked to my right and saw Nick Saban walking toward me. Carrying the above hat in his hand. What?? So, with every bit of dry humor you can imagine, Coach walked up to me, handed me the hat, and said, "This hat is for the best shot...or the worst shot. It's yours."

Well. I guess it's kind of cool that he gave me a personal gift. But kind of embarrassing to realize the reason.

Now I understand. I understand the pressure Cade Foster and Jeremy Shelley are under when they kick. Kicking and swinging a golf club are somewhat alike. A slight change in the motion can create a big error. And the ability to tune out nervousness is key. Cade did not choke against LSU - those were long kicks and he just barely missed hitting them straight. But if being nervous had any effect at all, now I understand. I've had a slight taste.