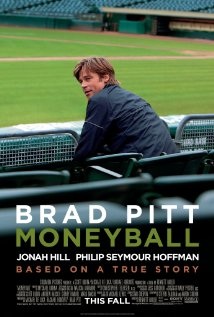 Several years ago I read a book by Michael Lewis called Moneyball. A guy I work with recommended it to me for various reasons: It was about using advanced mathematics to make better decisions - which is my career. It was about applying those decisions to baseball - so it was the perfect book for a person who's both a sports nut and a math geek. And finally, there was a whole chapter devoted to the case of Jeremy Brown, a former Bama baseball player.

Great book! I learned alot of stuff that I have been applying at work ever since. And I've watched while major league baseball has been applying the principles more and more. (The Boston Red Sox are among the biggest users of the approach and they used it to break their 86-year championship drought in 2004.)

But I never - never - thought it could be made into a movie. When I saw the trailers for just that a few months ago, I thought, "What?" Good math, good story, but not one that had action or interpersonal drama to appeal to the big screen.

I was wrong. I went to see the movie Wednesday night and I was spellbound. You know, sometimes movies are criticized for changing the book too much. In case, it was the key. Unlike the movie, the story was built around the baseball season and the question of whether Billy Beane's (Brad Pitt) unconventional methods would succeed. And whether that would allow him to keep his job, including how his daughter was worrying about him. In short, the book was about the math; the movie was about the people.

And it did a masterful job of making the transition. I saw the movie at 10:00 PM on a weeknight - a weeknight of a very stressful week where I was exhausted alot. And yet I was hanging on the edge of my seat the entire time, totally absorbed in the story. Awesome acting performances, a great screenplay, and just the right pacing made for a great 165 minutes of entertainment.

Being a sports nut and math geek, I may be biased. But if you're looking for a movie this weekend, Moneyball would be a pretty good choice.
Posted by Donnie Manis at 8:13 AM