When I last left Pennsylvania, Hurricane Irene had swept past leaving uprooted trees, power outages, and some flooding. Two weeks later, I was headed back with my nieces Macy and Haley for the Bama-Penn State football game. Now the state was reeling from Tropical Storm Lee, and flooding was extensive. Flights canceled, roads blocked...a general mess as between 8 and 10 thousand Tide fans were trying to make their way north. Did we make it? Oh yeah; we were determined, even if we had to drive. but we didn't.

Now, I  could make this a very long post by describing all the funny things that happened to us, and how every time we had to make a change to our travel arrangements the new ones were better than the old. We even got to spend alot more time with my PA friends than we originally planned. Better flights. Better lodging arrangements. More time in State College. But two stories illustrate just how amazingly things fell into place. Here they are:
______________________

We arrived in State College late Friday morning and went to the Enterprise counter to get our car. As we were filling out the paperwork, the guy asked us where we would be parking the car. I said, "Johnstown". He replied, "Johnstown?? That's almost a two hour drive! You're going to drive there today and then back here for the game tomorrow?" As I explaining that we had little choice (seeing as we had to change our reservation at the last minute due to the floods), he said, "Let me make a call."

Well, it turned out that his wife ran two hotels in town, and the one where she had a room was within walking distance of the stadium. When you factored in the gas of drving back and forth a couple of times, the cost was similar. Yes, that's right! We ended up staying on the edge of campus because we happened to puick the right rental car company.
_______________________

It was about three hours before kickoff and I was trying to meet up with some friends from Alabama who had driven up for the game. We wanted to hang out, and also I had their game tickets with me. so it was kinda important, you know? Well, if you've ever tried to communicate around a football stadium on game day, you know it can be dicey. Cell towers were not designed to handle 100,000 phones in such a small area.

So one of my friends in that group, Stephanie, calls and leaves a voicemail. Then she texts me. So I try to call her back. After going around with that a cojuple of times, I call an finally reach her. Right as she answers the phone and we greet each other by name, I hear someone call out, "Donnie!"

Well, my first reaction was a little bit of frustration, because I had finally reached her on the phone and now I was going to be dstracted by someone else I knew. I promise I am not making this up. The one who called my name was her sister Stacy, and they were standing not 10 feet away from me. So there we were, in a crowd of over 100,000 people, trying to find each other by phone, and we were in the same place! What are the odds??
____________________

It was an amazing weekend, filled with all the things I love about college football season and about traveling.

A whole weekend hanging out with some of my family. 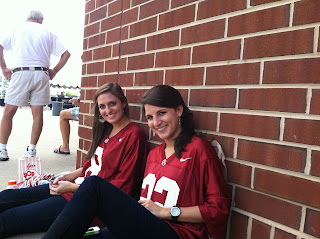 Hanging with friends I don't get to see much. 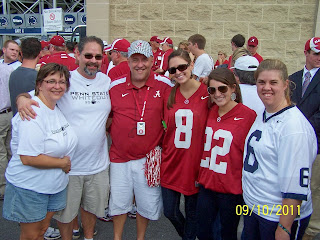 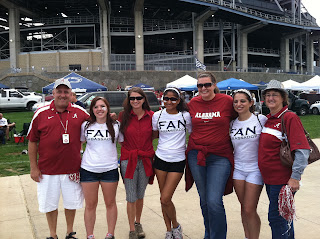 Great food and a beautiful campus. 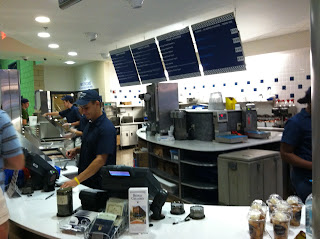 And of course the excitement of the game and it was topped off with a Bama win. 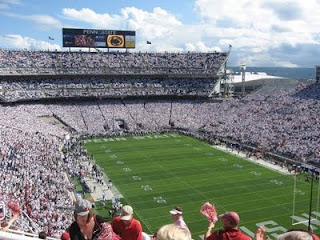 But I never will think about Penn State again without thinking of flood waters, my friends the Greens and the Swanks, messed up travel arrangments that just kept getting better...and "the phone call".