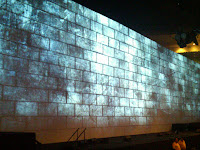 Then I saw in the right hand of him who sat on the throne a scroll with writing on both sides and sealed with seven seals. And I saw a mighty angel proclaiming in a loud voice, "Who is worthy to break the seals and open the scroll?" But no one in heaven or on earth or under the earth could open the scroll or even look inside it. I wept and wept because no one was found who was worthy to open the scroll or look inside. (Revelation 5:1-4)

Last night I went to see a performance of Pink Floyd's classic album The Wall, performed by former member Roger Waters.  If you don't know, The Wall is a two-record set that tells a cohesive story from song to song, and when it was released the band did a tour where they performed it as a whole, in two acts.  This was a recreation of that.

It was a fantastic experience, with great music and sets.  A real trip back into the 70s.  My nephew and I had hoped for a rumored appearance by Pink Floyd guitarist and vocalist David Gilmour, but it was not to be.  So the band did not reproduce the original sound (as Hunter, the Pink Floyd expert in our family, explained to me afterwards), but I thoroughly enjoyed it.  A great night!

If you don't know, the backdrop for The Wall is the aftermath of the Vietnam War and the American climate at the time.  It is about the journey of one man who finds that fear, hate, injustice, war, and the pursuit of pleasure and money have  built a huge wall separating him from his fellow man and from a life with any meaning.  (During the song Another Brick in the Wall - Part 2, the schoolchildren in the case all wore t-shirts that said "Fear builds walls".) All through the first act, the crew is building a wall on the front of the stage which eventually obstructs everything.  The last brick is put in place as the act closes.

Here is the classic song Another Brick in the Wall, Part 2 from the first act, performed live by Pink Floyd:


So, at intermission, Hunter and I talked about how this wall was a perfect picture of a life desperately crying out for meaning.  A life being lived contrary to the abundant life that God created us to have (John 10:10).   As the second act progresses, the album (and thus the show) works through the consequences of having built the wall.  Emptiness (Is Anybody Out There?).  Alienation and grief (Nobody Home).  Broken relationships and bitterness (Vera). Resignation (Comfortably Numb).

And then comes the defining moment in the live show.  As it draws to a close, our protagonist is fed up with that life.  He's had enough.  Something's gotta change.  so he, along with the audience begins to chant:

I had chill bumps as I shouted with the crowd.  This is what we all want.

And then it falls, and on stage it was an awesome sight!  Magically.  Because we said so.  But here's the thing: what has changed?  Where does a new and different life come from?  Just deciding to live differently by the force of our own will?  Indeed, "who is worthy to break the seals and open the scroll?"  Who is worthy to tear down the wall??


Then one of the elders said to me, "Do not weep! See, the Lion of the tribe of Judah, the Root of David, has triumphed. He is able to open the scroll and its seven seals."...And they sang a new song: "You are worthy to take the scroll and to open its seals, because you were slain, and with your blood you purchased men for God from every tribe and language and people and nation. (Revelation 5:5,9)

What an awesome answer!  The One who made us and went to the cross to defeat our greatest enemy can tear it down.  And has.  Amen!