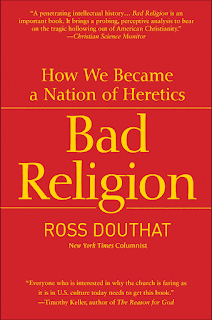 Not too long ago, I came across an article about the political phenomenon that is Donald Trump; the article was entitled How Christianity Explains Trump. In the course of the article a reference was made to the book Bad Religion: How We Became a Nation of Heretics.by Ross Douthat, a columnist for the New York Times. As I look around at the state of faith in my country today, I found the premise fascinating. So it didn't take me too long to read it. I recommend it to anyone who wants to understand the history of 20th and 21st century American religion, and what it means for us today.

The book is divided into two main parts. First, it traces major trends in religion over the past 100 years or so. This may sound like a tedious exercise and at times it really is. There is a lot of history, a lot of names, and no shortage of facts. While this is laborious, it is necessary to lay the groundwork for today's issues. He starts with a period of time where faith was grounded in the historic Christian tradition. While there were the usual denominational disagreements about doctrines, the foundation was the historic view of the nature of Jesus, the Trinity, and God's purposes for the world. The church was growing in popularity and figures like Billy Graham helped spur unprecedented levels of church attendance. He then shows how the church moved into what he calls "the locust years," where people (and clergy) were leaving the church in droves. Much of the church then responded with "accommodation," which was based on the idea that if we could just water down the message, people would come back to a faith that didn't demand much of them. It didn't work. So then came "resistance," characterized by pushback against the softness of accommodation. It led to active political involvement of evangelicals and is the basis of much of the support from Christians that Republicans enjoy today.

And then we come to today's world, and this is where I think Douthat has hit the nail on the head. All of these forces have led us to a pair of religious philosophies that he labels as heresies. My first reaction was, "Whoa, that's strong language!" But as I look back on the warnings of Jesus and the writings of the apostles about false teachers, I think he may have something. Both of these heresies are driving the public debates of 2016.

The first is the prosperity gospel - the unscriptural concept that God's primary goal for Christians is that we have riches, or at least an easy life. If we pray hard enough or have enough faith, God stands ready to give us all that we ever wanted. Put another way, God owes me the American Dream. This is an insidious distortion of the gospel, but why is the subject for another post.

The second is when we turn American nationalism into a religion. Somehow, a large number of us have come to believe that we are some sort of latter day Israelites, the chosen nation of God. And as such, we claim the promises of God to his people (made up of "people from every tribe and language and people and nation" - Revelation 5:9) and act as if they were made specifically to our nation. This leads to a sense of entitlement and religious snobbery toward our Christian brothers and sisters around the world. It show up on the liberal side in a belief that the USA is the solution to all the world's problems. On the conservative side, it shows up as a deep pessimism: Woe is us, for our nation which used to serve the living God is sliding down the path to destruction. If only we were God's people like we used to be.

The fact is (conservatives) that God's people have always been a remnant in every nation. It should be out goal to expand the kingdom of God one person at a time.

And it is also true (liberals) that our country is not the church and so we can not expect it to meet the needs of all the people; that's our job.

I believe the book gives an excellent diagnosis of the deep divisions we have in this country. So how should we respond as Christians? I believe we must:


Again, I highly recommend this book for anyone who is wondering why Christian influence is divided and waning. And then I recommend a lot of prayer about what you can do.

God bless his creation.
Posted by Donnie Manis at 7:00 PM