I have not seen the new movie Son of God that was released last Friday night. I certainly plan to, because its subject is the focus of my life and anything about him is going to draw my attention. But I have read plenty already. Enough to know that Satan was left out of the story. Not because of some conspiracy by which Hollywood is trying to undermine sound doctrine. no, it's because in the original footage, as aired in the miniseries The Bible, Satan looked like this: 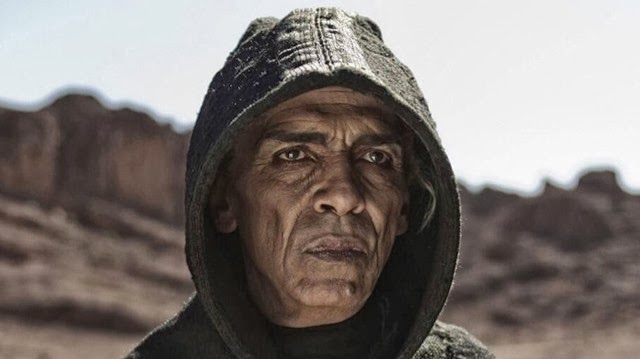 Look familiar? Well, for those of you who don't know, the day after the gospel episode of the miniseries aired, all the talk was about the actor who played Satan…and how much he looked like President Obama.

Many accused the producers of choosing the actor deliberately, to make some non-so-subtle political statement about the President. Many others thought this was ridiculous and oversensitive. But it was all the talk. All the talk.

So, in a massive high-budget production that the makers wanted to point to Jesus, to lift him up as the Savior of the world, everything else about the story got upstaged by Satan. All because he resembled a polarizing public figure.

I couldn't follow this story without being overcome with a sense of how the situation mirrors real life. Anytime Jesus is proclaimed, anytime the good news of liberation and salvation is proclaimed, you can be sure that the forces of evil are not happy. So they lurk, ready to pounce on the first opportunity to steal the thunder. Satan always wants to upstage Jesus if we let him.

He can't win, he won't win. But maybe, just maybe, if he can dazzle us with lights and distractions, we'll miss the truth. He is there, wanting to steal the glory. There, like Billy Flynn in Chicago, ready to give us the old razzle dazzle.

So yeah, I'm looking forward to seeing the movie. I can do without Satan being included…or any other detail for that matter. Anything that threatens to steal his spotlight needs to be left behind. As long as it's about Jesus.