Catching Fire: Yes, it's that good 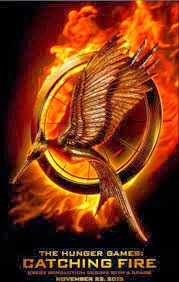 When you anticipate anything for as long as fans have waited for this movie, there is always a great risk of disappointment. You can build up something in your head to where there's no way to live up to it.

This is not one of those times.

Last night I saw the premiere of Catching Fire, the movie adaptation of the second book in The Hunger Games trilogy. It was amazing.

First, the pacing was outstanding. The movie ran over two hours but it seemed like about half that time. I know a movie is good when I don't have the slightest inclination to check the time. Last night? Not even once.

The casting for this series continues to be outstanding. I cannot even imagine anyone other than Jennifer Lawrence as Katniss. But that's true now for all the major characters from the first movie. I would make special note of one though. Donald Sutherland embodies the subtleties of President Snow's character in a way that I can't even describe. Slight changes in the his face's muscle tension communicate as much as lines of dialogue would. It's a pleasure to watch.

The new characters are very well cast too. They are are all so good. But with very limited lines, Jena Malone's Johanna Mason just about stole the show. I loved her portrayal.

As for the story, I could write for pages about places where this movie made the story come alive, giving us just the right blend of drama, humor, and action - at just the right times. Since the movie only came out last night, I'll avoid details that would be spoilers. I'll just say that I fully experienced the evolution of emotions in a group of people as they realized that they were being drawn into something greater than themselves.

Book adaptations are tough. There is so much material and so little time. If you are a fan of the books, you will undoubtably have a favorite part that you will miss, be be slightly disappointed. That was true for me as well on a couple of my favorite details. But remember, mine are probably different from yours. So I will make this bold statement: This is one of the best adaptations I've ever seen. They were faithful to the story, the spirit of the book, and many more details than most adaptations.

Do you want to see a story about tyranny, freedom, oppression, human dignity, power, courage, and, most of all, fear vs. hope? Then this is your story.

Check it out.
Posted by Donnie Manis at 7:55 PM