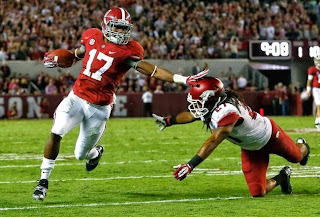 So another week passes, and the Crimson Tide dominates another opponent. But this week is different. Why?

Because the first BCS standings were announced last night. And here we go.

Here we go with the endless speculation about who deserves the second spot. With discussions of whether the current standings will hold up as the season progresses. With constant reminders of how the computer formulae don't make sense and the human polls are the result of people not watching games.

But also...here we go with the question, Who can beat Bama?

As a fan, it's fun being on that end of the speculation. Some of my friends are upset that the Tide is hated; I'm not, because I know it's a reflection of how good they are. It's hard to get it to sink in sometimes, but when the rest of the country watches my team, there is a mixture of SEC fatigue, Alabama fatigue, and boredom. Being the gold standard is lonely.

But I'm also very cautious. It's about this time last year that many of us thought Bama was unbeatable. Nobody had given them even the slightest competition, and we wondered whether anyone could hang with them. Then came LSU - and a last minute rally to come from behind and win. Then Texas A&M - and that story is all too familiar.

Yes, they got help after that and rallied to win their third championship in four years. But they can't count on that happening again. They need to take care of business week by week. If they do, the pieces will fall into place.

Get better every week. And start by beating Tennessee.