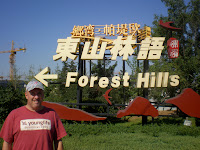 It was an early morning in a northeastern China city, a little over two years ago. I had spent about a day there visiting friends who were living there at the time. I was staying at a flat about 15 minutes away from theirs, and I had no idea how to get there. In preparing for the trip, I had learned a little Mandarin, but not enough to give good instructions to a taxi driver. So I was very dependent on my friends to make sure I could get back to them.

On this brisk August morning, Clark and I were going to catch a plane to Beijing to do a little sightseeing. He had arranged a cab to come and pick me up, take me to his place, and then take up both to the airport. So at 6:15 am, a van arrived...my transportation. I threw my luggage inside and jumped it. I said "Ni hao" (hi) to the driver, but that was about it.

Well, after about 10 minutes we suddenly pulled into a parking place and stopped. We were in some downtown district and I had no idea where we were. Where were we? Why had we stopped? Where were my friends? Did I even get in the right cab? After all, it's not like the driver and I were able to discuss it. Dang!

I had no clue what to do. What to say. How to find out what the heck was going on. I was in a foreign country where I spoke very little on the language. So I blurted out the only thing I could think of. Amazingly, in Mandarin:

I don't know exactly where that came from, but when I got over my..um...discomfort with the situation, I was pretty proud of myself. When I panicked and blurted something out, it was actually in the right language!

Well (fortunately), the rest of the story turns out not to be nearly that suspenseful. Turns out, the guy was stopping at his cab company's office to switch cars because he didn't need a huge van for just Clark and me. He called Clark's wife Laura (who speaks excellent Mandarin) and explained the whole situation to her and then handed the phone to me so that I could understand. We changed cars, picked up Clark, and headed to the airport. Beginning an awesome three days where I got to see: 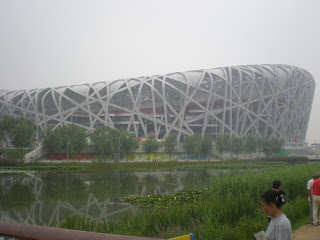 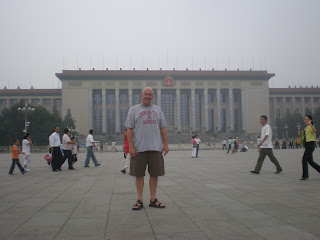 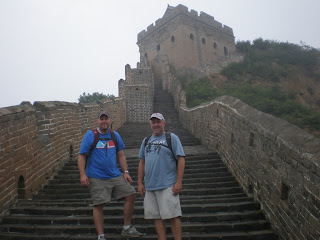 ...and many other awesome sights. We had a great time and I will never, ever forget it. I will also never forget that moment of panic, that moment when I realized that I was totally helpless and needed my "peng you" (friend) to rescue me. These kinds of adventures are the stuff life is made of.