The other side of Christmas

YHWH is close to the brokenhearted,
And saves those who are crushed in spirit. 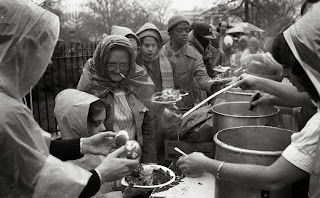 It was seven years ago, and Christmas was not normal. Not by any means. My dear mother had just passed from this life 12 days earlier, and it was there second year in a row where pain seemed to cast a shadow over the joyous holiday. The previous Christmas had been one of trying to find joy in the midst of her very serious illness. And now she was gone.

It was not the first or only time that I had to dig deep beneath the tinsel and bright lights to find the joy of Christmas. There was 1996 after my sister had been taken and my niece was gravely ill. There was Christmas Eve 1995 when I was inexplicably sad - for no reason I could think of. There have been less severe bouts with loneliness, in short bursts between truly joyous times with family.

Does any of this sound familiar to you? If you're human, I'm guessing it does. Especially if you have your mind saturated with the expectation that the lights, the trees, the presents, the music, and the whole extravaganza will be happy, no matter what.

Well, I've got good news for you. These emotions you struggle with - they are exactly why God took on flesh and entered this world. He knew that, left on our own, we were empty, lonely, and prone to base our happiness on our circumstances. He knew that there would be times where we would be brokenhearted. Poor. Blind.

And that's why he came. He told us so when, some 30 years after that remarkable night in Bethlehem, he began his ministry by quoting from Isaiah 61, saying,


"The Spirit of the Lord is upon me; he has appointed me to preach Good News to the poor; he has sent me to heal the brokenhearted and to announce that captives shall be released and the blind shall see, that the downtrodden shall be freed from their oppressors, and that God is ready to give blessings to all who come to him." (Luke 4:18-19, Living Bible)

And then, after a long dramatic pause, he declared that this passage was about him and his mission.

So if you're down this Christmas, if you are brokenhearted, God has good news for you. If you are dealing with sickness, death, uncertainty, loneliness, divorce, work problems, or a dozen other reasons that it might be tough to put on a smiley face and say Merry Christmas, take heart. THIS is exactly why Jesus came. This is why he was born to humble parents in a dingy corner of the world and was only visited that night by the poorest of the poor - shepherds. (The Magi came much later.) Because he came to ease our pain. He came to bring life in the midst of death.

Christmas is no cherry on top on of an already happy life. It is the basis for any true joy that we might have in the midst of our pain. Jesus came because we are a hurting people.

That's life. Not a counterfeit brought by Santa and his elves. But real life, from the one who made us. He will bring light to our darkness. If we'll just let him.

I've seen some dark Christmases. Thank God for the light of the Messiah. And that is why we celebrate.