Life of Pi: What is truth? 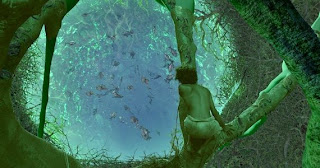 I just finished watching the movie Life of Pi. Beautiful story with amazing cinematography, and very powerfully told. I enjoyed the journey every step of the way. If you are looking for a story that inspires the imagination, you will certainly enjoy it.

But it is also a story told with an obvious point in mind - a point with a meaning that goes to the heart of one of the biggest questions facing us today. The question: What is truth? Is there any such thing as absolute truth? Or is it just a matter of preference?

It's not a new question. We can see it being asked by Pilate in John's account of Jesus' trial and crucifixion. Jesus states that he was born to testify to the truth, and that everyone on the side of truth listens to him. Pilate simply asks, "What is truth?" (John 18:37-38)

It's pretty clear to me after watching the movie that the answer of author Yann Martel and director Ang Lee is, "Whatever works for you."

In the opening moments of the movie, Pi prefaces his shipwreck story by talking about his journey to learn about multiple world religions. He is a "Catholic Hindu" and also follows pieces of Islam. He picks and chooses the parts of it that he likes.

Then he tells the story. Most of the movie is a fantastic tale involving a tiger that became his friend, miraculous rescues from adversity that could only be the hand of God, a carnivorous island with thousands of meerkats, and a tearful parting from the tiger who saved his life. Then, because the insurance adjusters say that can't put a story like that in their report, he tells another story of heartache and strife that seems very real as he is telling it.

So the key moment comes after both stories have been told, when the man is who wants to write a book about him points out the parallels in the two stories. Pi agrees, points out the basic facts that both stories explain, and comments that nobody can prove which story is true. Then...

Pi: "So which story do you prefer?"
Writer: "The one with the tiger; that's the better story."
Pi: "Thank you. And so it goes with God."

And a knowing smile comes to the writer's face.

And at that moment, we encounter the biggest lie of our time: the lie that there is no such thing as objective truth.

I remember writing about this before. But it is so important! Here it the crux of the matter: Something is either true or it isn't. It is not just a matter of which story we prefer. It is, which one is true? Either Jesus rose bodily from the grave or he didn't. Either he is the unique Son of God come to fulfill the prophecies that a Messiah would be King of the world, or he isn't. Either he demands our full allegience or he doesn't. We can't just pick and choose parts we like for our own unique a la carte faith. Well, actually we can and we do, don't we? But that doesn't make it true.

Now, I could be wrong about Jesus and his mission. About his establishing the Kingdom of God through his death and bodily resurrection. About his ultimate authority over the universe. But - and this is my only point here - I am either right or wrong. It is not possible that I am right and nonbelievers are too.

So enjoy the movie - I did. Let its theme stir thoughts about God and faith and your story. But I beg you not to fall into the trap of believing that truth is just a matter of what we prefer. Contemplate with Pilate, What is truth? And realize that there really is an answer.
Posted by Donnie Manis at 11:38 PM