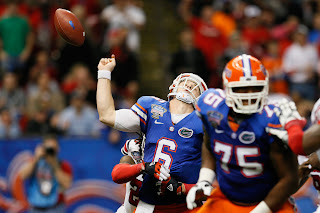 Did you see it? If you are a college football fan, you know that the Louisville Cardinals destroyed the mighty Florida Gators in last night's Sugar Bowl. The score was 33-23, but it was far worse than that. Louisville jumped out to a huge 21-3 lead and were never seriously threatened.

It was perhaps the biggest upset in BCS Bowl history. How could this happen?

Well, forgive me while I get something off my chest. It's a pet peeve about the way NCAA basketball tournament teams are selected. It will, no doubt, come into play in 2014 when the football playoffs start. And this game was a perfect example of why it's garbage.

When it comes time for the basketball selection committee to do its work, we are inundated with resume comparisons. This team's resume is better than that team's. How many non-conference teams did you play in the RPI Top 20? Top 50? Top 100? How many of those did you win? We see side-by-sides; we see blind side-by-sides (Team A vs. Team B). Over and over. And the results often do not pass the eye test.

So...this Florida team. They beat USCe (South Carolina). They beat LSU. They beat Texas A&M. They beat Florida State. Their only loss was to Georgia. By resume, they would be a clear choice to be a Top 4 team and qualify for the playoff. (Many thought their resume was enough that they should have been in the Top 2.) But they never - ever - looked the part. There always seemed to be something missing. They never passed the "eye test". And finally it showed. It showed with an embarrassing performance.

Now think about this: how does one go about finding a job? You create a good resume and send out alot of them, right? Good resumes are important; they get you in the door. A good resume gets you on the short list so that you get an interview. But there's always an interview. No employer in his right mind would hire you strictly based on a sheet of paper!

So what makes us think selecting the most deserving teams to play for a championship is any different? Selecting teams based on resume and resume only is equivalent to picking a resume out of a stack and hiring somebody without ever talking to them! Ridiculous. You have to meet them, talk to them, and get a feel for whether they are the right person for the job. Nobody hires from resumes alone.

So you've got to watch teams play. Observe matchups. Evaluate talent, cohesiveness, and discipline. The resume narrows it down to maybe 10 or 15. But the eye has to pick the four. It only makes sense.

Otherwise, you'll get a team like Florida playing for the championship. Ughhhh.

There, I'm done. Back to our regularly scheduled programming.
Posted by Donnie Manis at 6:36 PM