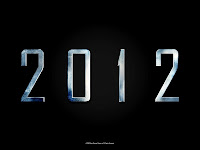 New Years' Day is one holiday that I have never seen as a huge deal. I mean, it's fun because I grew up watching lots of college football that day. And my mom would make sure I ate blackeyed peas. And everyone would remind me that it was a time to look forward and make resolutions about what you would do better the next year.

But I pretty much saw that last point as artificial - it's just when the calendar changes, but we can work on changing our lives any day of the year, right? And most of us never follow through on our resolutions. But as 2011 ends and I look forward to the next year, I have come to realize that we need milestones to order our lives. They help us reflect not he things we need to remember and to refocus our priorities for the future. Yes, we can do that every day, but there's something about a milestone that increases our focus. With that in mind, here are some thought on this milestone.
_________________________
I don't think it was a coincidence that my Scripture reading this morning was Joshua 1.
In this passage, Joshua was ending a period of transition, and big things war about to unfold. He had followed his leader Moses around in the desert for 40 years; God had freed his people from slavery years ago and now they were ready to enter the land He had promised them. But Moses wasn't around to lead them anymore...so Joshua was going to have to do it. What a daunting task for such a young man! A young man who, judging by the number of times he had to be told to be "strong and courageous", was  conservative, non-assertive, and prone to  hesitation.
But God made promises to him. He promised that he would go before him, go with him, and give him success at the thing he was being asked to do. What did Joshua have to do? He had to be strong and courageous, study the Word, and be obedient.
So as enter 2012, I feel in a lot of ways like Joshua must have. In alot of ways, 2011 was a year of transition and preparation for me. The previous year had brought changes in my life, especially as God had used my niece Brooke to introduce me to a passion for the people of Ethiopia and for orphans. How was I to apply that? Also, multiple changes began to take place at work, as some great leaders neared the end of their careers and the company began to focus on what the future might look like under new leadership. And of course, there was the tragedy of the April tornadoes and how that brought the need to share God's love with hurting people so much closer to home than just Africa.
So, I stand at the cusp of 2012 feeling alot like Joshua. 2011 was somewhat like the time in the desert: learning to obey God while waiting for him to bring some things into focus.
Yes, I can see that 2012 will be a year when great strength and courage will be required. I will need to stay connected to the Source. I will need to make hard decisions and be ready to withstand adversity. And I will need to stand up and be a leader so that Christ can be glorified at work, in Africa, among the young people he is preparing to go to Africa, and in my family.
Am I up to the challenge? No. Stinking. Way. Neither was Joshua. But the One who commanded him to go was. And he still is today.
2012 - Bring it on.
Posted by Donnie Manis at 5:35 PM