YoungLife: A changing of the seasons 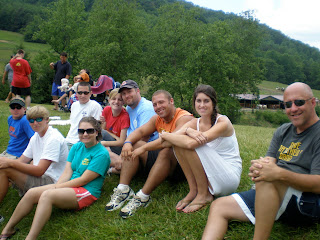 Everything on earth has its own time and its own season. (Ecclesiastes 3:1)

This past Thursday night was my last YoungLife club as a volunteer leader. It was a very strange thing to think about and definitely emotional, and yet it seemed very right. Because Solomon was right in the Scripture above. It was a great season, and a long one (I became a leader as a college freshman - if you know me, you do the math). But as I have prayed about this, it has become evident that God has other roles for me in his kingdom, both outside and inside YL.

I don't know of a ministry that portrays God's pursuit of us any better than YoungLife. Jesus came into our world and lived on our terms, showing us unconditional love and hanging out with all types. He then gave his life for the very people who rejected him. A YL leader is called to take the same approach - to sacrifice his/her comfort and enter the world of the teenager, loving them in all their imperfect glory. I still can't believe God chose me to be a part of his work through YL, but I am so glad that he did.

How big has it been in my life? Well, the picture at the top of my blog page was taken with friends at Windy Gap, a YoungLife camp. (As I look back, memories rush upon me like a flood. In no particular order:
So what now? Well, I want to always be a part of the ministry, it's just time to move on from volunteer leader. Maybe as a part of the Committee (the support structure for local YL), maybe as a mentor for any leader who wants advice, definitely through prayer. And as a reader of this blog you know the passion I've developed for international ministries and orphan care. I am very excited about the future and what the Lord has in store for me.

But now, as Ecclesiastes 3:1 becomes a reality for me, is the time to pause and look back. Thank you, Jim Rayburn for founding such an awesome ministry. Thank you, God, for letting me be a leader for so long. Thank you, friends, for, well, being my friends. And thank you to everyone in YoungLife for shaping my life and the lives of people I love.