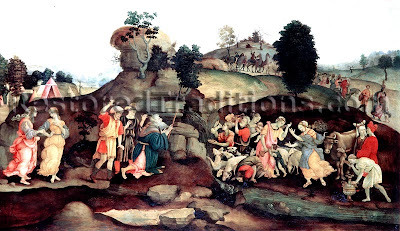 Sometimes decisions are made that have long lasting, even life changing consequences. And often, they are done under a cloak of spirituality. Such was the case for Moses - the day he lost his chance to see the promised land.

Most of you know the background: The children of Israel (that is, the descendants of Jacob) had been in slavery for 400 years. At the right time, God raised up Moses as the leader who would lead them out of slavery...and eventually to a lush land where they could well throughout history. They (like us) rebelled and did things their own way over and over, and so they wandered in the wilderness for 40 years. At one point, God began to provide food and water miraculously. The water was provided when Moses, at God's command, struck a rock and brought forth water.  So far, so good.

Then, one day, the people were feeling particularly thirsty again. They came to Moses and demanded relief. They were very demanding:


Now there was no water for the community, and the people gathered in opposition to Moses and Aaron. They quarreled with Moses and said, “If only we had died when our brothers fell dead before the LORD! Why did you bring the LORD’s community into this wilderness, that we and our livestock should die here? Why did you bring us up out of Egypt to this terrible place? It has no grain or figs, grapevines or pomegranates. And there is no water to drink!” (Numbers 20:2-5)

Well, Moses had had enough. He was very angry because he had given his life to these people.  He had spent years and years serving them, leading them, taking care of their every need. They were such whiners! I can just hear him: "I should have left you in Egypt? Seriously??" How could they be so ungrateful? To the Lord...AND to him!

So as he went to the Lord in prayer, we will see that he had his mind made up...and as a result, he didn't listen very well.  Here is what the Lord told him:


“Take the staff, and you and your brother Aaron gather the assembly together. Speak to that rock before their eyes and it will pour out its water. You will bring water out of the rock for the community so they and their livestock can drink.” (Numbers 20:8, italics mine)

But did he do that? No, he was fed up. Here's what he did instead:


So Moses took the staff from the LORD’s presence, just as he commanded him. He and Aaron gathered the assembly together in front of the rock and Moses said to them, “Listen, you rebels, must we bring you water out of this rock?” Then Moses raised his arm and struck the rock twice with his staff. Water gushed out, and the community and their livestock drank. (Numbers 20:9-11, italics mine)

So, instead of trusting God and just speaking to the rock, he struck it....twice. I think he did it because:
Well, if you read on in Numbers 20, you'll see that the people didn't suffer for Moses' mistake; water came out of the rock anyway. But he did tell Moses that because he didn't trust the Lord to honor him in front of the people, he wouldn't be the one to lead them to their final destination. Why not? Was that fair?

As I read this account, I am humbled beyond words. I don't want to just float through life working, eating, breathing, and having fun.  I want to make a difference in our world. I want desperately to lead teenagers into a growing relationship with Christ.  I want to be a good uncle to my nephew and nieces, setting an example of living life to love God and love people. I want to use my resources - time, money, and influence - to minister to the oppressed both here and around the world. But I encounter two major obstacles, both potentially deadly. One is the tendency to live for myself - my own comfort and pleasure.

And the other is Moses' trap: the desire to make things happen myself, without depending on God. Without depending on prayer. Working, doing the things God wants me to do, trying to make people see the Kingdom and how it permeates every aspect of life - and doing it all in my own strength. How silly!  How worthless! And how frustrating! I can't expect God to do great things if I won't get out of the way and let him. If I won't let go.

As I read Numbers 20, I see where that leads. God will do what he will. The people in my life and in my path will get their water. God will do awesome things with them. And if I insist on doing it my way, if like Moses I don't "trust in (him) enough to honor (him) as holy in the sight of the 'Israelites'", I too will be left behind.


Lord, I pray that I will pray more and strain less.  Give me the faith I need to know that you are sovereign and will accomplish your purposes, and that I am privileged to be a part of it.  Thank you. Amen.
Posted by Donnie Manis at 1:08 AM