Today I met Jack, Mary, and their son Jacob.  I shared some appetizers and about two hours or so with them.  And I left convinced that this sort of thing does not happen enough. 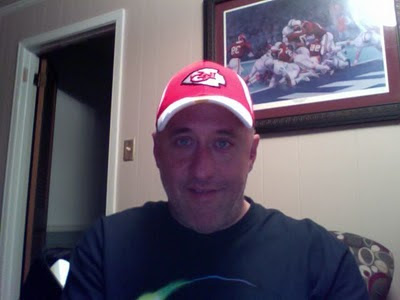 As you must know, I am a college football fan.  There's nothing like it, and that includes the NFL.  But since I do love football, I watch the NFL when I have time, and I even pick some teams to root for.  What are my criteria?  Well, the first and most consistent is this: on what team do my favorite former Alabama players play?  (I remember being a Jets fan because of Joe Namath and then Richard Todd.)  Then, I root for the teams that my football-loving nieces like.  (These are usually determined by their favorite QBs: Patriots, Vikings, Chiefs...they ARE young women, after all. :))  Finally, having something in common with friends is important.  Based on all three of these, the Kansas City Chiefs are currently at the top of my list. (Four Bama players, Haley [Brodie Croyle], and four friends in the KC area)

What does this have to do with Jack and his family?

Well, today after church I went out to eat with some of my family and then went home hoping to watch the Chiefs game.  It was a huge game with playoff implications and I thought it might be on.  But instead, as usual, they just had to feature Peyton Manning.  (Don't get me started on Peyton Manning!)  So after trying to keep up with the score for a while, I headed to a local restaurant that has lots of TVs with every NFL game.  I planned to at least see the second half.

I got there and the KC game was on only a couple of screens.  I secured a table with a great view of one of them and settled in to munch on some chips and salsa.

About five minutes later, in came this family, a couple and a young man who appeared to be around 20.  The older man (Jack) was wearing a Chiefs jersey.  The best they could do was a table next to mine.  Immediately he started leaning waaaaaay back trying to see the TV directly in front of me.  So, of course, I invited them to sit with me so he could watch his Chiefs - after all it was why he came there.

Folks, the next two hours were remarkable.  The family lives in our area, but are obviously huge NFL fans.  Jack likes the Chiefs, his wife the Steelers, and their son the Dolphins.  We simultaneously watched our Chiefs win a crucial game, while Jacob watched his Dolphins get eliminated from the playoffs be missing four field goals.  Joy and pain at the same table, but all in fun.  We talked about what we were watching.  About other games and playoff scenarios.  About the huge contingent of Eagles fans over in the bar area.  And yes, a little about life and our families.  It was a great afternoon, and we departed as if we were old friends.

You know, I have heard my parents talk about the old days, before air conditioning and television.  It's hard to believe, but I think everyone did know their neighbors because in the summer they had to spend time outside in the shade to keep from burning up.  What do we do?  We go to restaurants, movies, sporting events, and even work with tunnel vision.  It's a wonder sometimes that we ever get to know anyone new.  How are we going to live out the gospel in our world if we never get to know anyone?

I caught a glimpse today.  No, we didn't have any deep conversations about spiritual matters.  Or really about anything else.  But for just a little while, we connected.  I met some folks and actually shared a meal (sort of) with strangers.  Or former strangers.  And I found out that it's not as uncomfortable as we make it out to be in our minds.  And maybe, just maybe, something about the way we related will make a difference with them.  As you can tell from this post, they definitely made a difference with me.

I'm glad I met Jack's family today.  They're pretty cool.  I pray that I'll remember the experience and be less consumed by living in my own little world.  If that happens, I won alot more than a football game today.
Posted by Donnie Manis at 9:57 PM